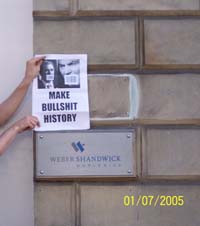 Working towards a nuclear new build

Since 2004, Weber Shandwick has been working with BNFL towards a new nuclear build in the UK. Part of this strategy has been to position nuclear as clean, safe, secure and climate-friendly (also see BNFL). By the Autumn of 2004, a year before the government annnounced its "official review," Weber and BNFL were working on thier own one:

We believe in the cause

One question people ask is whether PR consultants are neutral on nuclear and just provide professional advice. One email from Weber to BNFL from September 2004 answers this. It said: "As you know, you have a group of people over here who believe in this cause - we would love to do this work, and already feel excited about it".[2]

Gather intelligence on the climate sceptics

One of the main PR strategies of the nuclear lobby over the last three years has been to use the issue of climate change to push for a resumption in nuclear. The argument they have put forward is that nuclear is a low emitter of greenhouse gases and should therefore be used as a key policy option to fight climate change.

But what about those who deny climate change? They could, by default, undermine the case for nuclear: In September 2004 a letter appeared in The Times signed by Lord Lawson, and known climate sceptics Wilfred Beckerman as well as Julian Morris from the International Policy Network, amongst others that attacked the need for action on climate:

It said: "Sir, Both the Prime Minister and the Leader of the Opposition made major speeches last week on climate change and the policies that are supposedly required to deal with it (reports, September 14 and 15). It appears that, in this area, Tony Blair and Michael Howard are of one mind. They hold the same alarmist view of the world, and call for much the same radical -and costly programme of action ... There are no solid grounds for assuming, as Messrs Blair and Howard do, that global warming demands immediate and far-reaching action".

"Times letter today from Nigel Lawson and others which seems to be pooh-poohing climate change - anyone know anything about where this lot have popped up from?"

"Any intellgence (sic) gratefully received before we set to work here at WS end trying to find out what's going on..." [3]

When Labour's 2005 Manifesto was published, the spin doctors were quick to pick up on the following paragraph:

"We have a major programmme to promote renewable energy, as part of a strategy of having a mix of energy sources from nuclear power stations to clean coal to micro generators."

" To me, at least, this is a step towards a declared pro-nuclear position".