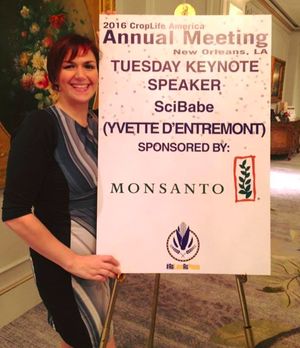 Yvette d'Entremont is a blogger and public speaker going by the name of 'SciBabe'. She has a B.A. in theatre, a B.S. in chemistry, and a masters degree in forensic science. Just prior to starting SciBabe, d'Entremont worked for Amvac Chemical Corp[1], a manufacturer of crop protection technologies, including pesticides and biotechnology. Amvac sells Lorsban marketing it as “the right choice!” in an exclusive agreement with Dow Chemical Company. Amvac also has an agreement with Monsanto Company to promote Roundup Ready genetically engineered crops.[2]

The SciBabe website was launched in 2014 and reads, "Come for the science, stay for the dirty jokes."[3] In 2015 d'Entremont began working full time as SciBabe[4] after gaining notoriety with an article she wrote entitled "The Food Babe Blogger Is Full of Shit"[5] about Vani Hari,[6] published in Gawker magazine. As SciBabe she has defended DDT [7] and neonicotinoids,[8] along with regularly promoting GMOs and glyphosate.[9] [10]

An article by d'Entremont published in 2017, "Chiropractors are bullshit"[11] was followed by an appearance on the Joe Rogan podcast[12]. Both the article and podcast received criticism from chiropractic professionals. [13] [14] In article on Medium, a writer who goes by the name "ChiroBabe" posted a satirical response to the SciBabe that stated, "Yvette entitles her latest academic treatise, “Chiropractors are Bullshit,” not to be confused with her other groundbreaking missives: The Incomplete List of Bullshit Websites or the Bullshit Proof Diet (patent pending)."[15]

Promotion of Splenda and Artificial Sweeteners

Yvette d'Entremont also became a Splenda spokesperson in 2017. She writes on the SciBabe website, "I’ve partnered with Splenda to try to combat some of the more pervasive myths about low calorie sweeteners like sucralose that I see every day on social media. Before every single shill accusation shows up, yes, let’s just get this out of the way. Indeed, I’m working with Splenda and these are all things I never would have said otherwise." [16] In an article at The Outline, SciBabe wrote an extended piece that argued that Diet Coke won't make you gain weight and does not cause metabolic disorders.[17] Nine months later, Yale Cardiologist Harlan Krumholz wrote for the Wall Street Journal that he and his fellow physicians at Yale were swearing off artificial sweeteners because new research found "people who consumed these sweeteners were more likely to have increases in weight and waistline, and a higher incidence of obesity, hypertension, metabolic syndrome, Type 2 diabetes and cardiovascular events."[18]

Jerry Coyne, biologist at the University of Chicago publicly expressed criticism of the SciBabe partnership with Splenda on his personal blog, "this represents a perceived conflict of interest that should not exist in a science popularizer."[19] On several different websites, Splenda now promotes Yvette d'Entremont as someone who "busts pseudoscience and myths" on nutrition.[20] [21]

As SciBabe, d'Entremont has been a public supporter of Monsanto Company. She once tweeted,"If you claim to be "pro-GMO but anti-@MonsantoCo," you're part of the problem. #GMOs.”[22] On the SciBabe Facebook page, she hosted a live Q&A with Monsanto’s Director of Millennial Engagement, Vance Crowe, [23] and was a keynote speaker sponsored by Monsanto at the 2016 CropLife America Annual Meeting in New Orleans, LA.[24]

During a visit to St. Louis, Missouri in 2017 d’Entremont toured Monsanto headquarters. She discussed her experience on the Independent Women’s Forum Working For Women podcast with Julie Gunlock.[25]