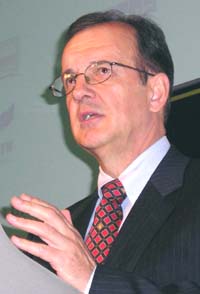 Dr Zygmunt (Ziggy) Switkowski was appointed to chair an Australian Government inquiry into the viability of a domestic nuclear power industry on 6 June 2006 (the Uranium Mining, Processing and Nuclear Energy Review Taskforce). In the past, he was CEO and Managing Director of Telstra (1999 to July 2005) and prior to this he has held the position of CEO of Optus Ltd and has worked for Kodak (Australasia) for eighteen years, serving as the Chairman and managing Director from 1992-1996. [1] [2]

He is also sits on the Asialink Council, the Foundation Council for the Australian Davos Connection and has been associated with the Brisbane Institute. [3] Dr. Switkowski is on Board of Directors of Foxtel , as of September 2005 he became a Director of Suncorp-Metway Ltd [4] and on 19 December 2005, was appointed as a Director of Tabcorp Holdings Limited (a “company which operates leading brands in the casinos, gaming, wagering and media sectors”).[5] In November 2005 he also became the new President of the Board for the Australian Centre for the Moving Image (ACMI). [6]

Dr Ziggy Switkowski was officially appointed to the Australian Nuclear Science and Technology Organisation (ANSTO) Board by the Governor-General of the Commonwealth of Australia on 1 January 2006 for a period of five years. [7]

”Dr. Switkowski holds an honors degree in Science and a PhD in nuclear physics from the University of Melbourne, with a further six years of post-doctoral research experience in international institutions. In 1993 he graduated from the Harvard Business School's Advanced Management Program.” [8]

Even after the change of federal government in late 2007, Switkowski was still proposing nuclear power stations. "I think subsequent generations of smaller reactors designed for smaller populations, mining towns and industries like smelting, might find a market and a home in places like Tasmania," he told ABC Radio in Hobart. (Switkowski was in Hobart to speak at a Tasmanian Chamber of Commerce and Industry conference). However, with a common reactor size being 1,000 megawatts -- roughly comparable in size to the entire Tasmanian electricity grid -- dramatically smaller reactors would be even less economically viable.[2]