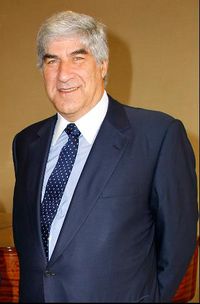 Bruce Kovner serves on the board of trustees and was formerly Chair of the American Enterprise Institute (AEI), a pro-coporate, right-wing think tank.[1][2] Kovner also formerly served on the board of the Manhattan Institute[3] and has provided financial backing for the New York Sun, a right-leaning newspaper,[4] and The New Republic magazine under Martin Peretz.[5] Through these organizations, Kovner was a major financial backer of right-wing infrastructure.[5]

Bruce Kovner and his wife, Suzie Kovner, are major contributors to Republican campaigns and causes in the United States.[6] The Kovners are among the top out-of-state supporters of Wisconsin Governor Scott Walker, reporting contributions of $120,000 to his campaign during the 2011-2012 Wisconsin recall elections.[7][8] In 2014 the Kovners were also revealed to have made a previously unknown $50,000 contribution during the recall to Wisconsin Club for Growth, which is a target of a long-running investigation into potentially illegal campaign coordination with Wisconsin Governor Scott Walker's electoral campaign.[9]

Kovner founded Caxton Corporation, a trading and hedge fund management company, in 1983, and served as chairman until he retired in 2011.[3] As of May 2015, Forbes reports that Kovner has a net worth of $5 billion.[10]

Bruce Kovner and his wife, Suzie Kovner, have been among the top individual contributors to federal political campaigns in the United States.[6]

The Kovners reported the following federal political contributions in the 2014 election cycle, all to Republicans:[12][13]

In 2012, the Kovners reported $1,924,100 in contributions to federal candidates, parties, political action committees, 527 organizations, and Carey committees, making them the 40th largest contributors in the country according to data compiled by the Center for Responsive Politics. 100 percent of their reported contributions went to Republican campaigns.[6]

In addition to the $120,000 the Kovners reported contributing directly to Wisconsin Governor Scott Walker's campaign during the 2011-2012 recall elections,[7][8] the Kovners also made an undisclosed contribution of $50,000 in March 2012 to Wisconsin Club for Growth (WiCFG), a Wisconsin-based organization that spent at least $9.1 million during the recall elections, and funneled at least $10 million more to other politically-active groups like Wisconsin Manufacturers & Commerce, while reporting that it spent $0 on politics to the IRS.[16] The contribution only became public in August 2014, when documents related to a "John Doe" investigation into potentially illegal campaign coordination between Walker's campaign, WiCFG, WMC, and possibly other groups were briefly unsealed. According to the Milwaukee Journal Sentinel, the documents suggest that Walker was advised to personally solicit funds from Kovner and others for WiCFG:

Case documents filed by the prosecutors include the following supporting exhibits related to Kovner: