Copenhagen Climate Challenge was a two-day conference organised by climate change skeptics at the time the COP15 climate change conference was being held in Copenhagen. The two listed contacts for the conference are Jens Robdrup from Climate Sense and Tom Harris, the Executive Director of the International Climate Science Coalition. Media reports also listed Committee for a Constructive Tomorrow.[1]

The program for the conference claims that "the controversy surrounding Anthropogenic Climate Change is just beginning - there is clearly no known consensus among climate scientists about this rapidly evolving field. We therefore invite the media, politicians and policy makers to give a fair hearing to the views of the renowned expert ‘climate realists’ speaking at this conference."[2] 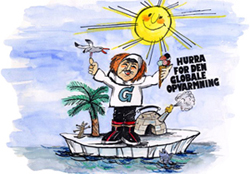 U.K. Guardian journalist, John Vidal, wrote that the "only clue I find to where the world's leading climate sceptics are meeting in Copenhagen is a large round sticker on a pavement outside a house down a side street. It depicts a happy-looking Eskimo standing on a clearly melting ice flow with a cheerful sun beaming down on him and his ice-cream under the words "Hurra global warming"."[3]

While COP15 attracted 33,200 delegates, the Copenhagen Climate Challenge conference was attended by 60 people (15 journalists, 18 speakers, 27 audience members).[4] According to Lenore Taylor of The Australian, the attendees had an average age "well over 60".[5]

The the conference, Craig Rucker, CFACT's Executive Director, told the conference that the world should "do nothing until the science is clear. We think there is no consensus on climate change and there should not be a treaty from Copenhagen based on a lack of consensus," he said. Telegraph journalist Louise Gray noted that "the audience, that was almost exclusively male and middle-aged, nodded in agreement."[6]

Speakers at the conference

Speakers at the were: