From SourceWatch
(Redirected from David H. Petraeus)
Jump to navigation Jump to search 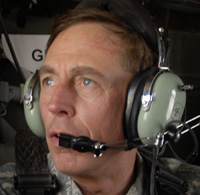 Lt. Gen. David H. Petraeus is "the top American military commander in Iraq, part of a broad revamping of the military team that will carry out the administration's new Iraq strategy." [1][2]

Petraeus replaced Gen. George W. Casey, Jr., who was confirmed February 6, 2007, by the U.S. Senate, as Army Chief of Staff.

Petraeus, who has "served two previous tours in Iraq", "sees the need for additional troops in Baghdad." He "helped oversee the drafting of the military’s comprehensive new" Counterinsurgency Field Manual published December 2006. [3]

On September 8, 2005, Lt. Gen. Petraeus left Iraq "after handing off command" of the Multi-National Security Transition Command-Iraq, which he had commanded for 15 months. [4] He most recently served as Commander of the U.S. Army Combine Arms Center at Fort Leavenworth, Kansas. [5]

Petraeus returned to Congress in April 2008 to testify before the Senate Armed Services Committee and the Senate Foreign Relations Committee. He reported that he needed more time with elevated troop levels to consolidate progress in security, saying that he wanted to halt troop withdrawals for 45 days over the summer after the last of the 20,000 soldiers of the troop surge in Iraq pull out, with withdrawals to resume in September. This would leave about 140,000 soldiers still in Iraq by November. He called the decrease of violence in Iraq "fragile and reversible."[2]

The following day President Bush announced that he was putting "Petraeus's" plan to halt withdrawals into effect.[3]

As commander of the 101st Airborne Division, Petraeus was in the 2003 invasion of Iraq, first driving towards Baghdad and then in Mosul. There Patraeus was was centrally involved in the reconstruction and political rebuilding efforts.[4]Petraeus' experiences with the 101st in Iraq were the central subject of Rick Atkinson book, In the Company of Soldiers (book 2004) about last year's efforts by the 101st Airborne during the Iraq War and occupation." [5]

When he returned to Fort Leavenworth, he participated in the refocus on counterinsurgency in the Army's training and education programs, which Jack Keane, the former Army general and vice chief, called him well suited for as "an imaginative commander who is experienced and [who] knows how to deal with irregular warfare." [4]

Petreaus, still serving as the commanding general of the 101st, was nominated on May 5, 2004 by Secretary of Defense Donald Rumsfeld for the lieutenant general rank and assignment as chief of the Office of Security Transition-Iraq, in which he was responsible for training the new Iraqi army.[6]

On April 20, 2004, the U.S. Department of Defense announced that Maj. Gen. Petraeus was being sent back to Iraq to "improve the training and equipping of Iraqi security forces after some either refused to fight or collapsed under attack by insurgents" during the early April 2004 Shiite Muslim uprising in Iraq.

Petraeus recently "commanded the 101st Airborne Division and was responsible for Mosul and other parts of northern Iraq. His performance was praised within the Pentagon and he returned to Fort Campbell, Kentucky, about two months ago."

Since the 2008 election, Petraeus' name has been mentioned as a possible 2012 presidential or vice-presidential candidate. According to the AP, Petraeus told reporters in March, 2010 that he will never run for office, yet his actions could indicate otherwise. For example, at that time, he was between speaking events at the New Hampshire Institute of Polititcs and nearby St. Anselm College, a location associated with past presidential candidates and debates. [7]