From SourceWatch
(Redirected from I. Lewis Libby)
Jump to navigation Jump to search 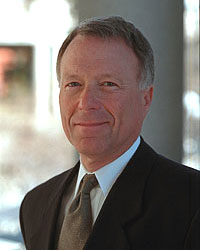 I. Lewis "Scooter" Libby, Jr., Assistant to the President and Chief of Staff to Vice President Dick Cheney since 2001, resigned October 28, 2005, after being indicted on five counts which included obstruction of justice, making false statements and perjury. He was later convicted on four of the five counts, and sentenced to thirty months in prison on June 5, 2007.[1]

The indictments resulted from a grand jury investigation which began October 31, 2003, into the leaking of covert CIA agent Valerie Plame’s name. Department of Justice Special Counsel Patrick J. Fitzgerald and FBI "investigators have been trying to determine whether Libby or any other administration officials knowingly revealed" Plame's identity or "about their involvement to investigators. Plame's husband, Joseph Wilson, is a diplomat and an opponent of the Iraq war who challenged U.S. President George W. Bush’s assertion that Saddam Hussein was in possession of nuclear materials." [1][2]

In January 2006, the Hudson Institute announced that it had appointed Libby as "a senior adviser". "Libby will focus on issues relating to the War on Terror and the future of Asia. He also will offer research guidance and will advise the institute in strategic planning," the think tank announced in a media release. [3]

Libby "testified to a federal grand jury that he had been 'authorized' by Cheney and other White House 'superiors' in the summer of 2003 to disclose classified information to journalists to defend the Bush administration's use of prewar intelligence in making the case to go to war with Iraq, according to attorneys familiar with the matter, and to court records," Murray Waas reported February 9, 2006, in the National Journal.

"Beyond what was stated in the court paper, say people with firsthand knowledge of the matter," Waas wrote, "Libby also indicated what he will offer as a broad defense during his upcoming criminal trial: that Vice President Cheney and other senior Bush administration officials had earlier encouraged and authorized him to share classified information with journalists to build public support for going to war. Later, after the war began in 2003, Cheney authorized Libby to release additional classified information, including details of the NIE, to defend the administration's use of prewar intelligence in making the case for war."

First Appearances May Be Deceiving

Libby, who made his first court appearance on Thursday, November 3, 2005, before U.S. District Judge Reggie Walton "on criminal charges stemming from the CIA leak investigation," as expected, plead innocent.

Libby has "promised a vigorous defence. ... As part of his strategy, Libby is expected to argue that any incorrect information he provided to federal investigators or the grand jury was the result of lapses in memory, rather than intentional lies, according to Libby's lawyer and other attorneys involved in the case," Reuters' Adam Entous reported October 31, 2005. (emphasis added)

On November 19, 2005, the New York Times identified some members of the group providing funds -- "a goal of about $5 million" -- for Libby's defense:

"The group includes some of the Republican Party's best-known leaders, including two former presidential candidates, Jack F. Kemp and Steve Forbes. Others include former Senators Fred Thompson of Tennessee and Alan K. Simpson of Wyoming, and Jeane J. Kirkpatrick, the ambassador to the United Nations under President Ronald Reagan. ... Bernard Lewis, the Princeton scholar who is a historian of the Middle East, and R. James Woolsey, who served as director of central intelligence under President Bill Clinton, have also joined the group."

"Among others who have committed to the effort are Howard Leach and the lobbyist Wayne Berman, who were fund-raisers for President Bush's political campaigns; Bill Paxon, the former Republican congressman from New York; former Ambassadors Mel Sembler and Dennis Roth; Richard Carlson, president of the Corporation for Public Broadcasting from 1992 to 1997; the magazine publisher Philip Merrill, who is also a former president and ex-chairman of the Export-Import Bank of the United States."

Also see Joe Conason, "Libby's secret defense fund. How much of the money given to Cheney's former aide will come from Halliburton et al.? The public now has no way to know," Salon, November 15, 2005. Preview or subscription required.

"In the opening days of the CIA leak investigation in early October 2003, FBI agents working the case already had in their possession a wealth of valuable evidence," Washington Post writers Carol D. Leonnig and Jim VandeHei reported November 13, 2005.

Investigators had "White House phone and visitor logs, which clearly documented the administration's contacts with reporters," they reported, "something that law enforcement officials would later describe as their 'guidebook' for the opening phase of the investigation: the daily, diary-like notes compiled by I. Lewis 'Scooter' Libby, ... that chronicled crucial events within the White house in the weeks before the identity of CIA operative Valerie Plame was publicly disclosed."

"Today, however, is not the time to analyze or to debate. And it is certainly not a day to celebrate. Today is a sad day for America. When an indictment is delivered at the front door of the White House, the Office of the President is defiled. No citizen can take pleasure from that." --Ambassador Joseph C. Wilson IV, PR Newswire, October 28, 2005.

"'This is the first time in 130 years a White House official has been indicted,' NBC's Tim Russert said." [4]

The Paragraph That Started It All

On October 28, 2005, The New Republic Online reposted the June 19, 2003, article "The First Casualty" by John B. Judis & Spencer Ackerman. TNR commented: "In his indictment of Lewis Libby, special prosecutor Patrick Fitzgerald cited this TNR piece. Here's the paragraph from the article that figured prominently in the indictment:

"One year earlier, Cheney's office had received from the British, via the Italians, documents purporting to show Iraq's purchase of uranium from Niger. Cheney had given the information to the CIA, which in turn asked a prominent diplomat, who had served as ambassador to three African countries, to investigate. He returned after a visit to Niger in February 2002 and reported to the State Department and the CIA that the documents were forgeries. The CIA circulated the ambassador's report to the vice president's office, the ambassador confirms to TNR. But, after a British dossier was released in September detailing the purported uranium purchase, administration officials began citing it anyway, culminating in its inclusion in the State of the Union. 'They knew the Niger story was a flat-out lie,' the former ambassador tells TNR. 'They were unpersuasive about aluminum tubes and added this to make their case more persuasive.'"

"Sometimes called 'Dick Cheney's Dick Cheney,' Libby [served as] an important foreign policy adviser inside the White House and [was once] seen [as] a possible successor to national security adviser Condoleezza Rice." [5]

Joseph Tate, Libby's lawyer, "is outlining a possible criminal defense that is a time-honored tradition in Washington scandals: A busy official immersed in important duties cannot reasonably be expected to remember details of long-ago conversations," the Associated Press's Pete Yost wrote October 29, 2005. "The lack-of-memory defense has worked with varying degrees of success in controversies from Iran-Contra to Whitewater."

"Tate referred to another possible line of defense," Yost wrote, "saying that 'for five years, through difficult times, Mr. Libby has done his best to serve our country.' That argument worked in the administration of President George H.W. Bush in 1992, though not in court."

Josh Marshall pointed out a "crucial piece of information" in his October 28, 2005, Talking Points. Stated on page 5 of the indictment (top of page, item #9) is found that Cheney told Libby

"Wilson's wife worked at the Central Intelligence Agency in the Counterproliferation Division. Libby understood that the Vice President had learned this information from the CIA."

Additionally, Judd Legum from Think Progress points out the following from page 3 of the indictment, which states

"At all relevant times from January 1, 2002 through July 2003, Valerie Wilson was employed by the CIA, and her employment status was classified. Prior to July 14, 2003, Valerie Wilson’s affiliation with the CIA was not common knowledge outside the intelligence community."

On the July 17, 2005, Meet the Press, reporter Matthew Cooper said that Lewis "Scooter" Libby, Vice President Dick Cheney's top aide was among the sources for a Time magazine reporter's story about the identity of a CIA officer ...

Before joining the White House staff, "Scooter Libby was most recently managing partner of the Washington office of the international law firm of Dechert, Price & Rhoads. He also served as Legal Advisor to the House of Representatives' Select Committee on U.S. National Security and Military/Commercial Concerns with the People's Republic of China, commonly known as the Cox Committee. [8]

After graduating from law school, Libby "went to work as a lawyer in Philadelphia, then got a job offer from his old Yale political science professor, Paul D. Wolfowitz, now the deputy defense secretary. In 1981, Mr. Libby went to work for Mr. Wolfowitz at the State Department, then left in 1985 to go into private practice. Freed from his State Department duties, Mr. Libby was able to research 1903 Japan, which was the slice of time between the Sino-Japanese War and the Russo-Japanese War that he had decided should be the backdrop for his novel. By 1989 he was working again for Mr. Wolfowitz, this time at the Pentagon, and [his novel 'The Apprentice'] was set aside with few regrets.

"'Shortly after I got there, we had the breakup of the Soviet Union and war with Iraq,' Mr. Libby said. 'So it turned out to be the perfect job.'

Libby has been identified as a...longtime lawyer for Marc Rich per antiwar.com, CNN and MSNBC.