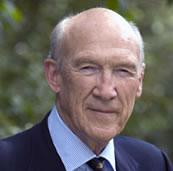 Alan K. Simpson is a former Republican U.S. Senator from Wyoming (1979-1997). Best known as a former chair of the Senate Finance Committee's subcommittee on Social Security, Simpson began a crusade against federal social programs as a member of the 1994 Bipartisan Commission on Entitlements and Tax Reform (billionaire Peter Peterson, then at Blackstone Group, was also a member of the commission). According to journalist Saul Friedman and consumer and medical affairs writer Trudy Lieberman, after the AARP weighed in to oppose the right wing's efforts to slash Social Security and Medicare, Simpson joined forces with the Scaife-funded Capital Research Center in an effort to destroy the organization and the labor-backed National Council of Senior Citizens (NCSC).[1] Backed by right wing groups, Simpson held hearings in April 1995 into AARP's finances and waged a relentless campaign against it.[2] NCSC folded (it was eventually succeeded by the Alliance for Retired Americans).[3] AARP's leadership was changed and public relations executive William Novelli, a Republican, took over, dramatically shifting the organization's direction and eventually backing George W. Bush's Part D drug program and subsidies to Medicare Advantage. "Those plans," writes Freidman, "then called Medicare Plus Choice, became the first wedge in the privatization of Medicare in 1997." The privatization scheme became part of the 1997 Balanced Budget Agreement, pushed through by Clinton administration chief of staff Erskine Bowles, who eventually co-chaired the Simpson-Bowles Commission with Simpson.

Simpson is the co-founder, along with Erskine B. Bowles, of the Fix the Debt campaign of the Committee for a Responsible Federal Budget (CRFB). He is also on CRFB's board.[4]

Simpson made some highly controversial comments disparaging Social Security and its beneficiaries and advocates related to his failed proposal to gut Social Security while co-chairing the National Commission on Fiscal Responsibility and Reform (see more below).

In an email to Ashley Carson, Executive Director of the Older Women’s League, Simpson said about Social Security, "And yes, I’ve made some plenty smart cracks about people on Social Security who milk it to the last degree. You know 'em too. It’s the same with any system in America. We’ve reached a point now where it’s like a milk cow with 310 million tits!"[5]

In 2012, Simpson referred to seniors advocating against the cuts to Social Security that Simpson and Bowles recommended as "greedy geezers."[6]

However, before Alan Simpson hated Social Security and wanted to gut it, he was an apparent advocate for protecting it. In 1996, while a U.S. Senator, Simpson filed a non-binding "sense of the Senate" that told the truth about how the financing of the program works, namely: "[S]ocial security is currently a self-financed program that is not contributing to the Federal budget deficit," and, "[S]ocial security beneficiaries throughout the nation deserve to be reassured that their benefits will not be subject to cuts."[7]

The National Commission on Fiscal Responsibility and Reform (often called Bowles-Simpson/Simpson-Bowles from the names of co-chairs Alan Simpson and Erskine Bowles; or NCFRR) is a Presidential Commission created in 2010 by President Barack Obama to identify "…policies to improve the fiscal situation in the medium term and to achieve fiscal sustainability over the long run." The commission first met on April 27, 2010, but failed to reach the super-majority needed to pass a final plan and trigger a vote in Congress. A chairmen's report first issued in November 2010, then in December is often referenced as the Simpson-Bowles plan.[8][9]

The plan contained painful austerity measures that critics contended would further weaken the economic recovery. The plan called for cuts in benefits for the elderly, veterans, and many government employees. Most importantly, it would have cut the Social Security "cost of living" or COLA increase. Reduced COLA would amount to a benefit cut of close to 3 percent for a typical retired worker. Since the median income for households of people over age 65 is just $31,000, this would be a big hit to a segment of the population that is already struggling. [10]

President Obama implicitly called for cutting Social Security by three percent and phasing in an increase in the normal retirement age to 69 when he endorsed the Simpson-Bowles plan.

On March 28, 2012, Representatives Jim Cooper (D-TN) and Steve LaTourette (R-OH) put a bill modeled on Simpson-Bowles, with, according to analyst Ezra Klein, "somewhat less in tax increases," to a vote in the House where it was rejected 382 to 38. 22 Democrats and 16 Republicans supported the bill.[11][12]

Alan Kooi Simpson was born September 2, 1931 in Denver, Colorado, but raised in Cody, Wyoming. His father, Milward L. Simpson, was also a U.S. Senator from Wyoming (1962-1967) and governor of Wyoming (1955-1959). He received a Bachelor of Science in Law from the University of Wyoming in 1954. He joined the Army after college, and married that summer to the former Ann Schroll of Greybull, Wyoming. He was ordered to Fort Benning, Georgia in November 1954, serving in German until his honorable discharge in 1956. He then returned to the University of Wyoming to study for his Juris Doctorate degree, completed in 1958. He was admitted to the Wyoming Bar and the United States District Court in 1958.[14]

From 1965 to 1077, Simpson was in the Wyoming House of Representatives, holding the offices of Majority Whip, Majority Floor Leader, and Speaker Pro-Tem. In 1978, he was elected to the United States Senate. He was Assistant Majority Leader from 1984 until 1994. He completed his final term on January 3, 1997.[14]

From 1998 to 2000, Simpson was visiting Lecturer and the Director of the Institute of Politics at Harvard University’s John F. Kennedy School of Government. Since 2000 he has been a Visiting Lecturer in the Political Science Department at the University of Wyoming. He is a partner in the Cody and Denver law firm of Burg Simpson Eldredge and Hersh and a consultant in the Washington D.C. government relations firm, The Tongour-Simpson Group.[15]

Simpson was appointed in early 2006 to the Iraq Study Group at the congressionally chartered U.S. Institute of Peace.[16]