Medicare has provided life-saving access to healthcare and financial security to millions of Americans for more than 45 years. Now this promise is under threat. "Reforming Medicare," which is code for "limit access to healthcare services for seniors," is a core component of the Fix the Debt platform.

The Campaign to Fix the Debt is the latest incarnation of a decades-long effort by former Nixon man turned Wall Street billionaire Pete Peterson to slash earned benefit programs such as Social Security, Medicare, and Medicaid under the guise of fixing the nation's "debt problem."

In 2012, Republicans in the U.S. House of Representatives voted overwhelming to eliminate the existing version of Medicare under the budget proposal drafted by Rep. Paul Ryan. Under the Ryan plan, Medicare’s guarantee of health coverage would have been replaced with a voucher that could be used to purchase either private health insurance or traditional Medicare.

The Ryan plan also would have raised the age of eligibility from 65 to 67. 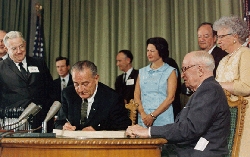 Before Medicare passed in 1965, only about half of people aged 65 or older had insurance coverage. Prior to Medicare, more than one in four seniors were estimated to go without health care due to financial concerns.[1] Now healthcare coverage for seniors is nearly universal.

Without access to Medicare, most older Americans would be unable to afford healthcare coverage on their own. Half of people over the age of 65 had income less than $20,000 in 2011.[3]

Medicare provides essential access to affordable coverage for a population that uses health care because they need it. Two-thirds of people with Medicare have multiple chronic conditions.[4] More than one-quarter of Medicare beneficiaries report being in fair or poor health, and roughly the same share have a cognitive or mental impairment.[2]

In 2012, Republicans in the U.S. House of Representatives voted to eliminate Medicare as it exists and replace it with a voucher system. Because this proposal did not have support in the Senate, it did not become law.

Had the Ryan plan been implemented in 2009, half of the beneficiaries enrolled in the program would have paid higher premiums to maintain their choice of plan and doctors.[7] This would be problematic given the limited financial resources of many seniors.

Medicare Is Not Bankrupt

Medicare is not on the verge of "bankruptcy." Most of Medicare is self-sufficient. Discussions of Medicare financing focus on Medicare’s hospital insurance program. The Affordable Care Act of 2010 extended the solvency of the Medicare hospital insurance program by eight years.[9] This was achieved while expanding coverage and without cutting core benefits. It was accomplished by reducing waste, fraud, and abuse; eliminating overpayments to private insurance companies; and rewarding doctors, hospitals, and other providers for quality care.

The 2024 date does not apply to Medicare coverage for physician payments and outpatients costs or to the Medicare prescription drug benefit. These parts of Medicare cannot run short of funds.[9]

One proposal offered by those seeking to "reform Medicare" and reduce Medicare spending is to raise the eligibility age from 65 to 67. The Ryan and House Republican budget resolution in 2012 would have raised the eligibility age to 67. One study, using 2011 data, estimated that, in a single year, 435,000 seniors aged 65 and 66 would be at risk of becoming uninsured.[11]

Low-income seniors would be at particular risk, as they would have nowhere to turn for coverage if their states reject the Medicaid expansions in the Affordable Care Act. In 2008, nearly a quarter of seniors had income below 150 percent of the federal poverty level (the poverty level was $10,326 for a single elderly person, and $13,014 for a couple).[12] Clearly, poor and near-poor seniors do not have the resources to purchase health insurance on the private market. If they lose eligibility for Medicare and do not have access to Medicaid, they will have few choices except to go without health insurance coverage.

2006 Proposed Plan Changes and a Conflict of Interest

In 2006, "[t]he Bush administration [said] it [had planned] sweeping changes in Medicare payments to hospitals that could cut payments by 20 percent to 30 percent for many complex treatments and new technologies," according to the New York Times.[13]

"The changes, the biggest since the current payment system was adopted in 1983, are meant to improve the accuracy of payment rates," Pear wrote. "But doctors, hospitals and patient groups say the effects could be devastating."[13]

An attempt to "reform" Medicare backfired on President George W. Bush in 2004, according to the Washington Times:[14]

"Where the White House saw hope for a political edge, many in the GOP saw a shameless sellout," the Washington Times reported.[14]

"According to several sources familiar with the negotiations, the core group of lawmakers trying to resolve separate House and Senate versions of the Medicare legislation has reached consensus on the basic strategy of charging higher insurance premiums to recipients with comparatively high incomes.[15]

"The negotiators, however, have not worked out crucial questions such as how many of Medicare's 40 million recipients would pay such a surcharge, when it would begin and how the government would administer it. 'The details are still very much up in the air,' said one source, although negotiators have reached a 'general consensus.'"[15]