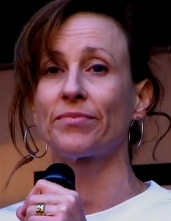 Joanne Nova aka JoNova (real name Joanne Codling), born circa 1967, is an Australian right wing communicator who mainly writes to promote anti-science views of climate in books and a denialist weblog, joannenova.com.au. She has no evident academic background in climate science; her degree (B.Sc.) is in molecular biology.[1] Nova is based in Perth, Western Australia.

Nova runs the Australian company Science Speak,[2] the main aim of which is to promote AGW denialism.

For four years, Nova worked for the Shell Questacon Science Circus, based in Canberra, Australia. The Science Circus is an outreach program run by Questacon, the Australian National Science and Technology Centre. The program is sponsored by Shell Oil, with additional support from Australian National University. She has also worked for Foxtel, a cable television company part owned by Rupert Murdoch's News Corporation.

Books: Skeptic's Handbook I and II

The handbook has been thoroughly debunked by John Cook's Skeptical Science website,[4] and also by DeSmogBlog.[5][6][7]

More recently Codling wrote a "Skeptic's Handbook II", which mainly attacks climate science with political arguments, such as "global bullies want your money".[8] Throughout the Skeptic's Handbook II, Nova adopts positions that are not falsifiable, hence unscientific; an example is "There is no consensus, there never was, and it wouldn’t prove anything even if there had been." The Handbook is a grab-bag of catchphrases and polemic.

Nova has been called out by climate bloggers for her shaky grasp of science, particularly over the Tropospheric Hot Spot. Both Cook and Lambert show that she is wrong on this question, inter alia.[9]