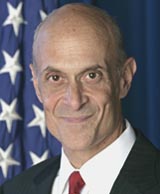 Michael Chertoff was nominated January 11, 2005, by George W. Bush to replace Tom Ridge as the head of Department of Homeland Security. His nomination was confirmed February 15, 2005.[1]

Chertoff is rumored to be the replacement for Attorney General Alberto Gonzales, who resigned August 27, 2007, with an effective date of September 17, 2007.[2]

"Even before the storm struck the Gulf Coast," Secretary of Homeland Security Michael Chertoff was the "federal official with the power to mobilize a massive federal response to Hurricane Katrina, [and] could have ordered federal agencies into action without any request from state or local officials."[5]

According to federal documents reviewed by Knight Ridder,[5] Michael D. Brown, who resigned on September 12, 2005, as director of the Federal Emergency Management Agency, "had only limited authority to do so until about 36 hours after the storm hit, when Chertoff designated him as the 'principal federal official' in charge of the storm."

Prior to his nomination, Chertoff served as a United States Circuit Judge for the Third Circuit Court of Appeals. "Judge Chertoff previously served as Assistant Attorney General for the Criminal Division at the Department of Justice. As Assistant Attorney General, he helped trace the terrorist attacks to the al-Qaida network after September 11, 2001 and increased information sharing within the FBI.[1]

"Prior to joining the Bush Administration, Judge Chertoff was a Partner in law firm of Latham & Watkins. From 1994 to 1996, he served as Special Counsel for the U.S. Senate Whitewater Committee.

"In 1990, Judge Chertoff was appointed by President George H.W. Bush to be United States Attorney for the District of New Jersey. He began his career in public service in 1983, in the United States Attorney's Office for the Southern District of New York. Judge Chertoff received his bachelor's degree from Harvard University and his J.D. from Harvard Law School."[1]

"Post 9/11, Chertoff played a key role limiting or eliminating civil rights and liberties protections by promoting actions such as: using 'material witness' warrants to incarcerate people of Middle Eastern and South Asian descent, interviewing thousands of Middle Eastern and South Asian men who entered the U.S. lawfully before and after the 9/11 attacks, denying a defendant facing the death penalty the fundamental right to face and question his accusers, and holding suspects indefinitely without counsel as enemy combatants. Some have described Mr. Chertoff as 'the driving force behind the Justice Department’s most controversial initiatives in the war on terrorism.'" Despite this record he was approved by approved as head of Homeland Security on February 15 in a 98-0 vote."[6]

After the December 2009 bombing attempt on a Northwest Airlines flight, Chertoff, now working in the private sector, has been urging for the use of full body scanners at airports. [7] While publicly advocating for the use of body scanners, Chertoff failed to announce how Rapiscan, the main manufacturer of these scanners, is a client of Chertoff's security consulting agency. [8] ""Mr. Chertoff should not be allowed to abuse the trust the public has placed in him as a former public servant to privately gain from the sale of full-body scanners under the pretense that the scanners would have detected this particular type of explosive," said Kate Hanni, founder of FlyersRights.org, which opposes the use of the scanners." [9]