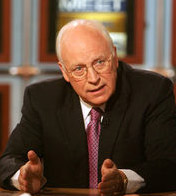 Cheney studied at Yale University, Casper College, and the University of Wyoming, where he earned B.A. (1965) and M.A. (1966) degrees. After studying political science at the University of Wisconsin he was a congressional fellow in Washington in 1968-69. In 1969 he was special assistant to the director of the Office of Economic Opportunity. In 1971 he was a White House staff assistant, then, until 1973, assistant director of the Cost of Living Council. After a year in business Cheney was deputy assistant to President Gerald Ford(1974-75) and then White House chief of staff (1975-77). [1]

Cheney was elected as a Republican member of the U.S. House of Representatives for Wyoming in November 1978 and was re-elected to a further five times. In March 1989, a week after being nominated as whip for the 101st Congress, he was confirmed Secretary of Defense in the administration of George H.W. Bush. He held the position until January 20, 1993. [2]

Following the election of Bill Clinton as President, Cheney took up a position as senior fellow at the American Enterprise Institute. In October 1995 Cheney was appointed as president and chief executive officer of the Dallas-based company, Halliburton Company. (Halliburton has won lucrative contracts with the U.S. government, especially in the war with Iraq. As of 2003, Cheney was being paid between $100,000 and $1,000,000 per year in "deferred compensation." [3] [4].

U.S. Vice President Dick Cheney's office was behind a push to censor congressional testimony that global warming poses a danger to the public, according to Jason Burnett, a former associate deputy administrator at the U.S. Environmental Protection Agency. The vice president and the White House Office of Management and Budget heavily edited testimony last year by the director of the Centers for Disease Control (CDC). "I read the testimony, checked with EPA scientists, and came to the conclusion that the draft testimony was fundamentally accurate as written," Burnett stated in a letter to Barbara Boxer, who chairs the Senate Committee on Environment and Public Works. [1]

Cheney and the tobacco industry

In an October 18, 1983 letter, Dick Cheney (as House Representative) invited Chuck Merlin, the Vice President for Legislative Affairs for the Tobacco Institute, to a fundraising dinner where the cost of attending was $250.[2] In November, 1983, the Tobacco Institute Political Action Committee donated $500 to Dick Cheney.[3] Stanely S. Scott, Vice President of Philip Morris in 1987, and Dick Cheney were colleagues at the White House when Cheney served as Chief of Staff under President Jerry Ford.[4] In August, 1982, then-Representative Dick Cheney (R-WY) added his name as a cosponsor of a bill calling for rotational warning labels on cigarettes, which was sponsored by Representative Henry Waxman (D-CA).[5]

U.S. District Judge Gladys Kessler, who presided over the The U.S. Government's racketeering case against Big Tobacco, is the judge who ordered the U.S. Department of Energy to release documents from the energy task force of Vice President Dick Cheney.[6]

Cheney's chief of staff, until October 2005, was I. Lewis Scooter Libby, who sought to influence the content of Colin Powell's February 2003 speech to the United Nations. [7] (Libby resigned in October 2005 after being indicted on charges of to a grand jury investigating the outing of CIA operative Valerie Plame). In December 2006, Libby's lawyers announced that Cheney would be called to testify in the hearing on the charges, scheduled for January 2007.[7]

Cheney's wife, Lynne Cheney, is a senior fellow with the American Enterprise Institute. Cheney's daughter, Elizabeth Cheney, is the Principal Deputy Assistant Secretary of State for Near Eastern Affairs and Coordinator for Broader Middle East and North Africa Initiatives and heads the Iran-Syria Operations Group.

Cheney: on violence in Iraq

Currently no contact details exist, the official whitehouse.gov page for Dick Cheney has been removed.