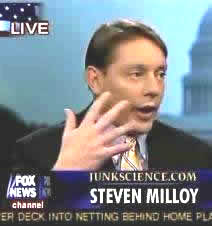 Steven J. Milloy was a columnist for Fox News and a paid advocate for Phillip Morris, ExxonMobil and other corporations.

His main claim to fame, however, was as the junk-science arbiter at the head of The Advancement of Sound Science Coalition (later Center) (TASSC). This pseudo-association was established for the tobacco industry by APCO, which at that time was virtually Philip Morris's private public relations company.

Milloy ran TASSC's website Junkscience.com, which was dedicated to debunking what he alleged to be false claims regarding passive smoking, global warming, DDT, environmental radicalism and scare science among other topics.[2]

His other website, CSR Watch.com, was focused on attacking the corporate social responsibility movement. He also heads the Free Enterprise Action Fund, a mutual fund he runs as a partnership with tobacco science executive Thomas J. Borelli, who was listed as the secretary of the Advancement of Sound Science Center. Milloy also operated the Regulatory Impact Analysis Project Milloy had offices in Washington, but later shifted his organisations to operate from his home in Potomac, Maryland.

Milloy became so famous in tobacco lobbying circles that he was made available to the media around the world through the Atlas Group network of Libertarian think-tanks under contracts to the tobacco industry. [1]

He was registered as a lobbyist with EOP Group, then worked for a time with Thorne Auchter and James Tozzi through the Federal Focus operation. Then he was taken up by APCO to provide the behind-the-scenes functions of TASSC.

In January 2006, Paul D. Thacker, a journalist who specializes in science, medicine and environmental topics, reported in The New Republic that Milloy has received thousands of dollars in payments from the Phillip Morris company since the early nineties, and that astroturfs controlled by Milloy have received large payments from ExxonMobil [4]. A spokesperson for Fox News stated, "Fox News was unaware of Milloy's connection with Philip Morris. Any affiliation he had should have been disclosed."

From the 1990s until the end of 2005, Milloy was an adjunct scholar at the libertarian think tank the Cato Institute.

Milloy has spent much of his life as a lobbyist for major corporations and trade organizations which have poisioning or polluting problems. He originally ran the National Environmental Policy Institute (NEPI) which was founded by Republican Rep Don Ritter using oil and gas industry funding.[2] Ritter also tried to get tobacco industry funding, but NEPI was dedicated to challenging the cost of Superfund toxic cleanups ordered by the EPA and the FDA, and transforming both of these government authorities to make them less effective.

NEPI was also associated with the Air Quality Standards Coalition (AQSC) which was devoted to weakening Clean Air laws. This organization took up the cry of "we need sound science" from the chemical industry as a way to counter claims of pollution -- and Milloy became involved in (to the point of heading) the "sound-science" movement. Its most effective ploy was to label scientific findings that were detrimental to the large funding corporations as "junk." Milloy was one of its most effective lobbyists because he wrote well, and used humor -- and because, until recently, it was impossible to document his connection to the control and funding by the tobacco companies.

Milloy joined Philip Morris's specialist-science/PR company APCO & Associates in 1992, working behind the scenes on the corporate threat newsletter "Issues Watch".[3] By this time, APCO had been sold to another company, Grey Marketing, and the newsletter then became a part of the world-wide Grey Marketing organization. Milloy was then able to use this network as a feed source for propaganda services to a wider range of corporations who had international poisoning and polluting problems.

Issues Watch bulletins were only given out to paying customers, so Milloy and APCO established the "Junkscience.com" web site, which gave him an outlet to attack health and environmental activists, and scientists who published findings not supportive of his client's businesses. Like most good PR it mixes some good general criticism of science and science-reporting, with outright distortions, lies, and manipulative pieces.

The Junkscience web site was supposedly run by a pseudo-grassroots organization called The Advancement of Sound Science Coalition (TASSC) which had been organized by APCO for Philip Morris,[4] APCO initially paid ex-Governor Garrey Carruthers of New Mexico to head this pseudo-front.[5] Milloy originally was the back-room researcher and functionary brought in from the EOP Grpup who issued the press releases. However when Carruthers resigned, Milloy moved up and began to call himself "Director" and his friend and associate Bonner Cohen (who also worked for APCO) became "President".

TASSC was eventually exposed publicly as a fraud, and so Milloy established the Citizens for the Integrity of Science to take over the running of the Junkscience.com web site. [[5]

In August 2005 Media Matters for America reported that Milloy (who is not a scientist himself) had self-published a deceptive "study" purporting to show that radiation levels at the U.S. Capitol Building were 65 times higher than the proposed standards for the federal government's planned high-level radioactive waste storage facility at Yucca Mountain. [7]

Milloy apparently still runs the Advancement of Sound Science Center and the Free Enterprise Action Institute. Those two groups—apparently run out of Milloy’s home—received $90,000 from ExxonMobil. Key quote: The date of Kyoto’s implementation will "live in scientific and economic infamy." Connections to ExxonMobil-funded groups: at least five.[8]

Writing in The New Republic in January 2006 Paul Thacker noted Milloy's long-term, close relationships with corporations, including ExxonMobil and Philip Morris. "According to Lisa Gonzalez, manager of external communications for Altria, the parent company of Philip Morris, Milloy was under contract there through the end of last year," Thacker wrote. "But, whereas Scripps Howard fired Fumento and apologized to its readers, Fox News continues to look the other way as Milloy accepts corporate handouts," Thacker writes. Fox's Paul Schur told Thacker, "Fox News is unaware of Milloy's connection with Philip Morris." [6]

Milloy is also the co-founder, with tobacco industry executive Thomas J. Borelli, of the Free Enterprise Action Fund, which claims to be an investment fund that seeks "long-term capital appreciation through investment and advocacy that promote the American system of free enterprise." According to a January 26, 2006 report in the Chicago Tribune, "The fund's advocacy stance boils down to opposing many of the things supported by traditional 'social investment funds,' because issues like global warming or corporate governance distract business from its real role of operating in the best interests of shareholders." However, its performance as an investment has been less than stellar. The Tribune called it the "Stupid Investment of the Week ... Strip away the rhetoric, and you're getting a very expensive, underperforming index fund, while Milloy and partner Thomas Borelli get a platform for raising their pet issues. ... An expense ratio capped at 2 percent--ridiculously high for a portfolio of corporate giants--makes stock market returns unrealistic. From inception on March 1 of last year through Dec. 31, Free Enterprise Action returned 2.32 percent; the S&P 500 returned 4.72 percent. That's ugly." [7]

Milloy blames smokers for their illness and death:

This was further extended into the political sphere with his regular fax distribution of the "Issues Watch" newsletter.[14] which went out to most of the major tobacco companies by fax or e-mail.