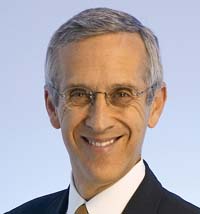 Todd Stern has been appointed by U.S. Secretary of State Hillary Clinton as a special envoy on climate change. His role will be as principal advisor on international climate policy and strategy, the Barack Obama Administration’s chief climate negotiator at the meetings -- such at COP15 -- on a successor agreement to the Kyoto Protocol.[1]

Announcing his appointment as Special Envoy for Climate Change, Hillary Clinton stated that his role would to "serve as a principal advisor on international climate policy and strategy. He will be the Administration’s chief climate negotiator. He will be leading our efforts with United Nations negotiations and processes involving a smaller set of countries and bilateral sessions. Because the main cause of climate change is the burning of fossil fuel and because the solution rests with our ability to shift the global economy from a high to a low carbon energy base, the Envoy will be a lead participant in the development of climate and clean energy policy. He will participate in all energy-related policy discussions that, across our government, can have an impact on carbon emissions, and will be looking for opportunities to forge working alliances."[1]

Speaking following the announcement of his new role, Sterm thanked John Podesta, who, he said, "more than anyone has been my mentor in Washington, and is a model for all those who fight the good fight."[2]

A biographical note from just prior to his appointment by Hillary Clinton stated that Stern was a Senior Fellow at the Center for American Progress "focusing on climate change and environmental issues. He is a partner at Wilmer Cutler Pickering Hale and Dorr, where he is Vice Chair of the firm's Public Policy and Strategy practice."[3]

"As Assistant to the President and Staff Secretary in the White House from 1993 to 1998, Stern played a central role in preparing the key issues of domestic, economic and national security policy for the President's decisions. He also coordinated the Administration's Initiative on Global Climate Change from 1997 to 1999, acting as the senior White House negotiator at the Kyoto and Buenos Aires negotiations. At Treasury, from 1999 to 2001, Stern advised the Secretary on the policy and politics of a broad range of economic and financial issues," it stated.[3]

"After leaving the Government, Stern served as an Adjunct Lecturer at Harvard's Kennedy School of Government, and as a Resident Fellow at the German Marshall Fund of the United States. Stern graduated with Highest Honors from Dartmouth College in 1973, and with Honors from Harvard Law School in 1977. He is also a Member of the Council on Foreign Relations," it states.[3]

Stern joined Wilmer, Culter and Pickering, as it was known then, in July 2001. In a media release the firm stated that his "practice will focus on congressional investigations and crisis management. He will also provide strategic advice to clients on a broad range of legislative and policy matters, in such areas as financial regulation, intellectual property, and the environment."[4]

His current -- as of January 2009 -- biographical note on the Wilmer Cutler Pickering Hale and Dorr website stated that he was "a partner in the firm's Regulatory and Government Affairs and Litigation/Controversy Departments, is vice chair of the Public Policy and Strategy Group and a member of the Defense, National Security and Government Contracts and Government and Regulatory Litigation Practice Groups. He joined the firm in 2001. His practice focuses on public policy advice, congressional investigations, strategic counseling, crisis management and anti-money laundering."[5]

The biographical note states that Stern "concentrates on advising clients on matters that lie at the intersection of law, public policy, politics and media. He counsels companies, industry coalitions and other institutions on a wide variety of public policy issues. He has represented clients in numerous House and Senate investigations. He has provided strategic advice to companies and institutions regarding problems that carry significant political or public relations risk. He has also frequently advised on crisis management matters, including advising on the development and execution of media strategy that is sensitive to both underlying legal concerns and public relations imperatives. In addition, Mr. Stern has advised banks, broker-dealers, insurance companies and other financial institutions on anti-money laundering matters, including compliance, the development of government regulations, and enforcement."[5]

It also added that, while working for the White House, Stern "played a central role in preparing the key issues of domestic, economic and national security policy for the President’s decision, as well as handling a number of special assignments, such as the management of contested nominations." It also stated that he "served as Senior Counsel to Senator Patrick Leahy on the Senate Judiciary Committee, where he advised Senator Leahy on intellectual property, telecommunications and constitutional issues."[5]

A 1995 media release announcing Stern as Assistant to President Bill Clinton and Staff Secretary stated that "Prior to his service at the White House, Stern was Senior Counsel to Senator Patrick Leahy on the Senate Judiciary Committee's Technology and Law Subcommittee (June 1990 - January 1993), and Vice President with Podesta Associates (1989 - 90). Stern served as General Counsel with Associated Mills/Pollenex in Chicago and New York (1985 - 87), as an associate with Paul, Weiss, Rifkind, Wharton & Garrison (1979 - 85) and as an attorney with the Legal Aid Society in New York (1977 - 79). Stern worked on the Clinton-Gore '92 presidential campaign and the presidential transition."[6]

When Stern was an adviser to Bill Clinton, he drafted a memo addressing an internal investigation into in controversy over the sacking of several staff members in the travel office of President Bill Clinton. "The problem is that if we do any kind of report & fail to address these Qs, press jumps on you wanting to know answers; while if you give answers that that aren't fully honest (e.g. nothing re Hillary) you risk hugely compounding the problem by getting caught in half-truths. You run risk of turning this into 'cover-up.'," he wrote.[7]

Articles and Speeches by Stern on Climate Change