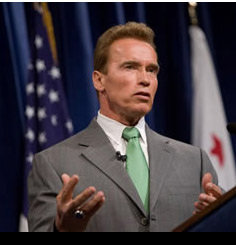 Arnold Alois Schwarzenegger, a Republican, is currently the 38th Governor of California. Schwarzenegger was a bodybuilder and movie action-hero from late 1980's-early 1990s. His speciality was "revenge fantasy" films. He entered politics in 2003 by running against then-California Governor Gray Davis in a recall attempt. He was elected during the California 2003 Gubernatorial recall election when 55.4% of the people voted to recall then-Governor Gray Davis, a Democrat. He contributed $50,000 to the recall committee. [1]

Promotion of tobacco use

Schwarzenegger is known for keeping a "smoking tent" at the California State Capitol in which he smokes cigars. This is noted by public health advocates as being particularly egregious because California was the first state in the Union to enact a ban on smoking in workplaces, including restaurants and bars.

Schwarzenegger was also one of several movie stars to appear on the cover of Cigar Aficionado magazine (c. 1997) to promote cigar smoking. Other stars included Bruce Willis, Demi Moore, and Pierce Brosnan. In January 1998, an article appeared in the Baltimore Sun describing an extensive public relations plan to bring cigars back into popularity by feeding multiple positive stories about them to the news media and by getting prominent movie stars to use them and be seen with them in public. [2]

A 1997 draft press release from the Philip Morris (PM) collection discusses the promotion of cigars and cigar use. It mentions how Arnold Schwartzenegger's image has helped increase cigar use and sales around the country:

News reports from coast to coast show that the cigar smoker's image is now more Arnold Schwartzenegger and less Archie Bunker. The change has been good for the industry. The Cigar Association of America reported last fall that it expected 1996 sales of premium, hand-rolled cigars to hit more than 150 million units, nearly double 1994 sales.[1]

A 1992 Philip Morris document entitled "Marlboro Target Exploration: Understanding Generation X," reports that when young adult male "Marlboro targets" were asked to name the person whom they admired most, they ranked Arnold Schwartzenegger just below their mothers/ fathers/ grandfathers, and just above retired U.S. General Norman Schwartzkopf in level of admiration.[2]

A 1998 article in the Baltimore Sun described how cigar makers paid Hollywood brokers to get stars like Mr. Schwartzenegger to "wield cigars on television and in the movies." The article credits Mr. Schwartzenegger and other stars like Demi Moore, Madonna, hockey great Wayne Gretzky and model Claudia Schiffer with helping bring cigars back to popularity, to the detriment of public health. The article points out that while federal authorities cracked down on use of film to promote cigarette smoking to youth, cigars escaped the attention of rulemakers and thus their promotion remained unregulated.[3]

"Though committees for statewide candidates [in California] have contribution limits of $21,200 per donor, no such limit applied to committees for ballot measures until the day after the Nov. 2 election, when controls established by the state Fair Political Practices Commission took effect. Schwarzenegger had opposed the controls. ... In the weeks before that window closed, Schwarzenegger took in millions through the Recovery Team account," Christian Berthelsen wrote in the November 17, 2004, San Francisco Chronicle.

In 2008, Schwarzenegger went against the stated position of most environmental groups by advocating for nuclear power. At the Wall Street Journal's "ECO:nomics Conference," he said that nuclear power has "a great future" and urged listeners to "relook at that issue again rather than just looking the other way and living in denial." [4] In an editorial, the Los Angeles Times responded, "There are safer, quicker, cheaper and cleaner alternatives, such as solar and wind power, greater efficiency measures and decentralized power generators that produce electricity and heat water at the same time. Let's exhaust them before even considering the nuclear option." [5]

Schwarzenegger continued to support nuclear power throughout 2008. "I myself think that nuclear power has a great future, and I think that we should look at it seriously again," he said at a Santa Barbara conference in March. "I know there are people who are scared about it, and I know there are certain environmentalists that put the scare tactics out there, and they frighten everyone that we're going to have another blowup and all of those things. But I think technology has advanced so much." In a September 2008 event at the Commonwealth Club of California, Schwarzenegger remarked, "It drives me nuts when I go over to France and they get 80 percent of their power with no greenhouse gas emissions whatsoever from nuclear power. And they have been safe, they have been handling it the right way and they are building some more. So I think we should look at that again and revisit it." [6]

Recordings of Governor Schwarzenegger's private meetings illustrated his administration's political desire to cultivate an environmentally-friendly image for him. After being mistakenly posted on a public website, the recordings were copied by aides working for Schwarzenegger's former Democratic opponent, Phil Angelides. As the Los Angeles Times reported in April 2007: [3]

"Every four or five weeks, we're going to spend an entire week on the environment," the governor's communications director, Adam Mendelsohn, told him in a private meeting in early 2006. "... I do not believe it's smart politics here in California to not talk about your environmental stuff". ...

In the recordings, Schwarzenegger seems to wonder if people would accept a high-living, Hummer-driving ex-muscleman as an environmentalist.

"Here I was driving Hummers," he says at one point. "I don't know if I leave myself open here by calling myself an environmentalist. So we should just be aware of that."

Environmentalists have been critical of Schwarzenegger's record as governor. In 2006, the California League of Conservation Voters graded his record as 50 out of 100, "down from the previous two years when he logged a 58." [4]

Schwarzenegger has also killed several proposed state environmental measures. One would have assessed a "$30 fee on each container that moves through the Los Angeles and Long Beach ports, with the money devoted partly to cutting air pollution." Another "would have made it state policy to take every step necessary to reduce dependence on oil. And he vetoed a measure that would have required that half of all cars sold in California by 2020 be capable of using alternative fuels." In addition, Schwarzenegger "has taken more than $1 million in campaign money from the oil industry," reported the Los Angeles Times in April 2007. [5]