Brennan Dawson was Vice President and spokeswoman for the Tobacco Institute in Washington, D.C. from 1986 to 1996. 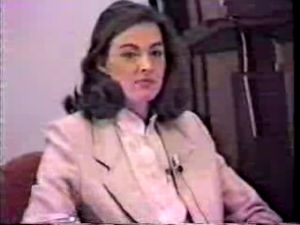 Brennan Dawson rehearsing responses to press questions (date unknown) in a video from the Internet Archive.

According to a deposition given on June 24, 1992, Ms. Dawson attended high school at the Academy of the Holy Cross in Rockville, Maryland, and graduated in 1978. She went on to attend the University of Maryland, but quit and never earned a degree. After leaving university, she got a job doing accounting work for a group of construction companies. After that, she worked for five years in the Public Affairs office of the U.S. Department of Health and Human Services before getting a job with the Tobacco Institute. She got the job at the TI through a "series of mutual friends." [1].

Ms. Dawson was a witness in the United States Department of Justice (DOJ) lawsuit against the tobacco industry (1999-2006). DOJ attorney Leo Wise questioned Dawson and showed that over her career with the Tobacco Institute she made many appearances on television in which she repeatedly denied a causal relationship between smoking and disease, saying, for example, on Good Morning America in 1989, "I think it’s worth pointing out that all the links that have been established between smoking and certain diseases are based on statistics. What that means is that the causative relationship has not yet been established." [2]

In November 1991 Dawson told the Washington Post that "I think we overuse the word 'addictive.' I think smoking can be a habit." [3]