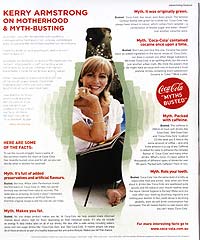 In October 2008, Coca-Cola South Pacific Pty Ltd (CCSP) -- the subsidiary company responsible for marketing and technical services for the Coca-Cola products in Australia -- published advertisements titled Kerry Armstrong on Motherhood and Myth-busting in a number of Australian newspapers. (Kerry Armstrong is a high profile Australian actress.) The advertisement prompted complaints to the Australian advertising industry's self-regulatory body, the Advertising Standards Bureau. In November 2008 the ASB di8smissed the complaint.[1]

However, the Australian government's consumer protection agency, the Australian Competition and Consumer Commission, found the advertisement breached laws banning false and misleading advertising and directed the company to take out corrective advertisements in a number of newspapers. Sydney Morning Herald marketing reporter, Julian Lee noted that Coca-Cola's agency, Singleton Ogilvy & Mather, refused to comment. He summarised the outcome of the debacle as "The cost to Coke? Its fee to Kerry Armstrong - about $70,000. The corrective ads - $200,000. And its reputation - priceless."[2]

The advertisement featured a preamble by Armstrong in which she stated in part that "when I was asked to speak out in favour of one of the world's largest brands, Coca-Cola, it became clear that it was surrounded by all kinds of myths and conjecture. Now that I've found out what's myth and what isn't, it's good to know that our family can continue to enjoy one of our favourite drinks. My boys now call me 'Mun, the Myth Buster!'"[3]

Following Armstrong's premable was a list of "some of the common myths the team at Coca-Cola has recently busted once and for all, so you can decide what to believe for yourself."[3] It listed the myths as being: 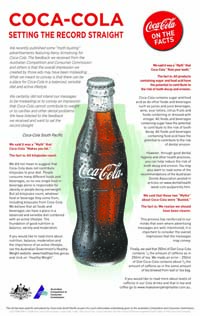 In April 2009, the Australian Competition and Consumer Commission announced that Coca Cola had agreed to publish corrective advertisements. In the media release announcing CCSP's binding undertakings, the ACCC stated that it believed that "the advertisements had the potential to mislead consumers by representing that:

"Coke's messages were totally unacceptable, creating an impression which is likely to mislead that Coca-Cola cannot contribute to weight gain, obesity and tooth decay. They also had the potential to mislead parents about the potential consequences of consuming Coca Cola," the ACCC stated.[4]