Defending the consumption of farmed salmon 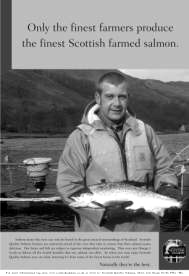 In July 2004 Scottish Quality Salmon (SQS)- the quality assurance arm of the Scottish salmon farming industry - launched a campaign to dismiss health concerns over the consumption of farmed salmon.

In a media release Scottish Quality Salmon chief executive, Brian Simpson stated that "People have been distorting science and seeking to discredit salmon farming for too long. It is time that the industry stood up and said: 'We are proud of what we do, the way we do it, and what we produce'." [1]

PR Week reported that SQS had announced it would launch an initial four-week £200,000 advertising blitz to counter concerns raised by the publication of a study by the University of Albany Institute for Health and the Environment over the concentration of toxic chemicals in farmed fish. The advertising will carry the theme 'Naturally they're the best' and, according to PR Week, "be supported by trade press briefings, postcard mailings, press trips to salmon farms and local radio appearances." [2]

The advertising campaign will be managed by the London-based PR company Chrome Consulting.

The study, Health Risks Associated with Consuming Farm-Raised Salmon, by seven U.S. and Canadian researchers, funded by Pew Charitable Trusts, "found significantly higher levels of cancer-causing and other health related contaminants in farm-raised salmon than in their wild counterparts." [3]

The study, the findings of which were published in Science magazine in January 2004, was based on analysing fillets from about 700 farmed and wild salmon from both wild and farmed salmon from the major salmon producing regions around the world. The salmon samples originated from fish purchased in 16 cities around the world.

While contaminants were higher in farmed fish the study noted that four known cancer-causing substances - PCBs, dioxins, dieldrin, and toxaphene - "were consistently and significantly more concentrated in farmed salmon."

While wild salmon were almost always less contaminated than its farmed equivalent, salmon farmed in Europe had cosnsistently higher levels than those raised in North or South America.

The highest levels of PCB's - known to cause cancer and associated with impacts on the development of children - were in salmon farmed in Scotland and the nearby Faroe Islands.

Eric Rimm of the Harvard School of Public Health, told Associated Press that the study "will likely over-alarm people in this country".

"To alarm people away from fish because of some potential, at this point undocumented, risk of long-term cancer _ that does worry me," he said. [4]

On Fox News, Steven Milloy claimed that the inclusion by the authors of a qualifying statement that studies on the impacts of the pollutants on human health was unclear "because of their very small sample sizes and narrow geographic representation."

For Milloy, the absence of evidence indicated that the media coverage of the report was warranted. "In fact, there has never been a single health effect associated with consumption of farmed salmon despite countless people eating millions of tons of it over the last 20 years. That's no surprise since PCBs, dioxins and the other so-called "contaminants" considered in the study have never been scientifically shown to cause harm in humans at typical exposure levels," he said. [5]

These are not "so-called" contaminants, they are long-lasting, cumulative toxins. PCBs are almost certainly carcinogenic, as are dioxins and cause liver damage and effect levels of estrogen. Dioxins are worse, and are linked to birth defects and other severe health problems. These effects only occur when sufficient quantities are ingested, but as they are cumulative, even an amount harmless in itself can lead to toxic quantities building up in the body.

The UK Food Standards Agency has said that the benefits of eating oily fish outweighed any risks posed by dioxins in salmon.

The process by which the toxins build up is similar to that by which BSE in cows and Salmonella in chickens were spread in the UK: that of recycling animal matter in feed.

According to SQS the advertising campaign in Scotland will "act as a curtain raiser for a £3 million campaign funded equally by the industry and the Scottish Executive" promoting the health benefits of eating Scottish farmed salmon. According to PR Week women's and parental magazines appearing in September 2004 will carry advertorials promoting the health benefits of salmon.

The salmon farming industry is seeking to capitalise on the Food Standards Agency endorsement of pregnant women and children eating oily fish including salmon. "It identified, for the first time, that the majority of the population could eat up to 300% more oily fish every week than had previously been suggested," SQS stated in the media release.