From SourceWatch
(Redirected from EWG)
Jump to navigation Jump to search

Environmental Working Group (EWG) is a national public interest organization co-founded by Ken Cook and Richard Wiles. Its mission, according to its Web site, is "to use the power of public information to protect public health and the environment."[1] 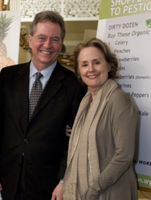 On March 3, 2010, Alice Waters, a member of the EWG Advisory Board, appeared with Ken Cook and Drummond Pike at a gala event in San Francisco. "EWG staff and key supporters gathered ... to introduce the audience of environmental stalwarts to the increasing convergence of EWG’s two major fields of work -- how common toxic chemicals find their way into the bodies of America’s children and the impact of modern agriculture on the environment and human health. ... Alice Waters (pictured with Mr. Cook), celebrated chef, advocate, author, mother and pioneer of “The Edible Schoolyard” program in Berkeley, Calif, attended the Earth Dinner event. Mr. Cook payed homage to her impact on cuisine and the food system as a whole in his presentation." [2] The San Francisco Chronicle would report, "EWG President and co-founder Ken Cook welcomed new EWG advisory board member Edible Schoolyard founder Alice Waters and City Attorney Dennis Hererra as he unveiled EWG's 2010 Right to Know Campaigns. [3]

On April 1, EWG released a statement defending Francesca Vietor and Alice Waters of the Chez Panisse Foundation from criticism regarding their failure to publicly oppose growing food in toxic sewage sludge. Francesca Vietor is no longer with the Chez Panisse Foundation. The EWG report relied upon and repeated false claims in an April 1, 2010 statement by the Foundation.[5] Their release admitted, however, "advocacy organizations have been right to oppose the distribution of composted sewage sludge from the SFPUC for use on Bay Area gardens and farmland." (emphasis added) [6]

The Food Rights Network released a major investigative report on July 9, 2010 titled: Chez Sludge: How the Sewage Sludge Industry Bedded Alice Waters. [7] It examines collusion between the Chez Panisse Foundation and the SFPUC based on an extensive open records investigation of the SFPUC internal files. (To view the internal documents see: SFPUC Sludge Controversy Timeline.)

In the winter of 2010/2011 Francesca Vietor left her position at Chez Panisse Foundation, rose from Vice President to President of the SFPUC, and took a position on the Board of Directors of the Environmental Working Group.

EWG Board of Directors