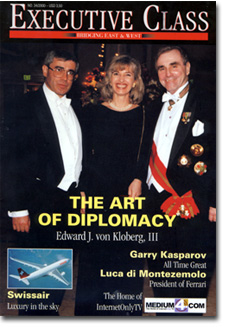 In a 2000 profile, Von Kloberg (right) was praised by Executive Class magazine as "a master of diplomatic mixing and mingling."

Edward J. von Kloberg, III (January 9, 1942-May 1, 2005) was a flamboyant Washington lobbyist who listed among his clients a number of despotic world governments, including that of Saddam Hussein.

"I'm an old-fashioned lobbyist," von Kloberg said in 1999. "I give a lot of dinners and lunches." His clients included Bahrain, the Democratic Republic of Congo (formerly Zaire), Gambia, Iraq, Kyrgyzstan and Slovakia. His accomplishments include winning Most Favored Nation status in the U.S. for Romania during the years when it was ruled by communist dictator Nicolae Ceausescu. He also boasted of having had Zaire removed from the UN Human Rights Oversight list in 1989. A copy of von Kloberg's 1991 public relations plan for Zaire was leaked to the press. It boasted of planting letters to the editor and opinion editorial in U.S. newspapers. "Our press outreach placed dozens of letters-to-the-editor in newspapers across the country," it stated, and promised to "monitor and counterattack opposition to the government of Zaire" by "conducting an information campaign against the Rainbow Lobby and other opposition groups in order to reduce their legitimacy in the United States. ... We will work to counter the moves made by these anti-Zaire organizations with counter-demonstrations, an anti-Rainbow Lobby campaign, and an infiltration of the Zairian opposition in the United States." [1]

In January of 1995, von Kloberg was hired by the Foundation for the Development of Guatemala (FUNDESA), a conservative business group closely allied with the Guatemalan government, to conduct a three-month, $75,000 public relations campaign aimed at countering "the PR campaign implemented by ... sympathizers" of Jennifer Harbury, an American woman whose husband, guerrilla leader Efrain Bamaca Velasquez, disappeared in 1992 after being captured by the armed forces. His firm drafted and placed letters to the editor in newspapers including the New York Times and The Miami Herald, describing Guatemala's supposed strides toward democracy. His firm also produced Guatemala News, a newsletter targeted to Congress and U.S. opinion leaders, which accused guerrilla groups of heinous abuses "against the civilian population." The newsletter conspicuously omitted mention of a recently-released report by a United Nations Verification Mission which investigated government human rights abuses in Guatemala, including numerous recent executions, cases of torture and death threats. While the PR campaign was still ongoing, U.S. Representative Robert Torricelli of New Jersey revealed to the press that Guatemalan soldiers on the CIA payroll had murdered Harbury's husband. [2]

In 1996, he was hired by the Honduran Apparel Manufacturers Association to defend it against charges of sexual abuse and child labor in Honduran garment factories producing apparel for a line of clothing endorsed by Kathie Lee Gifford. [3]

In defense of his activities on behalf of dubious clients, von Kloberg wrote a 1989 column for the Journal of Commerce titled "Consulting Is a Public Service." In it, he argued that "lawyers represent both guilty and innocent clients. Why should a different standard be applied to public relations and government affairs counsel?"

Asked if he was ever ashamed of the clients he represented, he replied, "Shame is for sissies." He added that "my job is to give my clients the best advice: the truth. If they're a basket-case, they need to know it. I never hide the warts, but show them what they can do better." However, his definition of truth was remarkably flexible. On behalf of Saddam Hussein, for example, he attempted to justify Iraq's gassing of its Kurdish population by claiming that Hussein was trying to fend off Islamic fundamentalists.

Von Kloberg retired in 2002, suffering from health problems that included cancer, diabetes and a heart attack. In May 2005 he committed suicide in Rome by leaping from a castle. [4][5] His obituary, published on the front page of the Washington Post, described him as "a legend of sorts in public relations circles ... Washington is a city of advocates and image enhancers, but only a few have staked their reputations as representatives of despots, dictators and human rights violators." It continued:

By far the most outrageous and lasting public impression of von Kloberg came from a notorious "sting" operation by Spy magazine. For a story the satirical journal titled "Washington's Most Shameless Lobbyist," a staff writer posed as a Nazi sympathizer whose causes included halting immigration to the "fatherland" and calling for the German annexation of Poland.

According to the magazine, von Kloberg expressed sympathy for the fake client -- and her $1 million offer. And then he was drubbed in print. Shortly afterward, he showed up at the opening of Spy's Washington office with a first-aid kit and sported a trench helmet, "so I can take the flak," he announced.

Friends of von Kloberg saw the article as a revolting caricature of a man whose grace and charm were displayed at intimate dinner parties he threw to unite disparate voices -- 3,500 dinners, each with 12 guests, he estimated.

At one gathering, he persuaded Nizar Hamdoon, Iraq's ambassador to the United States and the United Nations under Hussein, to meet Jews for the first time. He also brought together District residents, diplomats, socialites and journalists; many of the latter were fond of his famously accurate news tips.

His voice, said one friend, was marked by an "almost Rooseveltian, high-class accent." He drove enormous black cars and draped foreign medals (Zaire's Order of the Leopard among them) across his tuxedo. At night, he sported one of two favorite black capes: one with red lining, the other with prints of doves.

As was said of the Bloomsbury diarist Violet Trefusis, a writer he admired, von Kloberg had a "taste for outmoded splendors." He believed such flourishes were essential to conducting business with world leaders, the kings and presidents for life whose presence he relished. When they listened to his advice, it was "very invigorating," he said.

His clients handsomely paid him for his social and diplomatic clout. He often took them to his favorite lunch spot, the Jockey Club, the famed but now defunct restaurant in the Westin Fairfax Hotel. He would get tipped off when first lady Nancy Reagan or some ranking administration figure had made a reservation. Such unofficial meetings often were effective ways to win an audience with U.S. powerbrokers otherwise inclined to close their doors to representatives of reviled regimes.

Von Kloberg expressed no ethical concerns about his work, saying people such as Hussein were U.S. allies at the time. He said he was "utterly fascinated" by the Iraqi leader and returned to the District to "propagandize why they were gassing the Kurds." The reason given, he said, was to prevent Arab fundamentalism from spreading in the Persian Gulf.