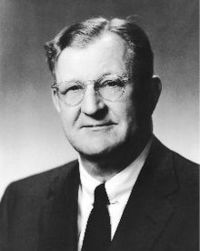 Fred Koch and the Nazis

Lisa Graves writes about Fred Koch and his close ties to Nazi Germany in her article, "Koch Daddy and the Nazis, a Revealing History from Jane Mayer."[3] Graves writes,

"The Kochs have previously acknowledged part of their father’s history about helping Soviet dictator Josef Stalin build refineries and then preaching anti-communism in the U.S. once his fortune was made.

But, Jane Mayer uncovers new information about how Fred Koch joined forces with a genuine Nazi sympathizer from the U.S. to build a refinery personally approved by Adolf Hitler himself, one of the three largest refineries in the Third Reich, which was used to create fuels for Hitler’s deadly attacks on peaceful nations.

While Mayer does not call Fred Koch a “Nazi sympathizer” himself, readers may disagree when reading Fred Koch‘s public praise for Germany under Hitler, as well as the other Axis powers, Japan and Italy.

Fred Koch, who had busied himself in Hitler‘s Germany, apparently found much to praise in the economies of the Axis powers, while denigrating the work ethic of his fellow Americans and the Democratic legislation responding to the extreme hunger and poverty millions of Americans were facing as a result of the Great Depression.

As Mayer notes, in 1938 Fred Koch said “Although nobody agrees with me, I am of the opinion that the only sound countries in the world are Germany, Italy, and Japan, simply because they are all working and working hard.”

As she notes, he added “The laboring people in those countries are proportionately much better off than they are any place else in the world. When you contrast the state of mind of Germany today with what it was in 1925 you begin to think that perhaps this course of idleness, feeding at the public trough, dependence on government, etc., with which we are afflicted is not permanent and can be overcome.”

Historical Timeline of Fred Koch's Work During this Period

(This timeline was taken directly from Lisa Grave's article, "Koch Daddy and the Nazis, a Revealing History from Jane Mayer" cited above.)

1929
The stock market crashes, beginning a worldwide depression. Before the crash, Fred Koch‘s Koch-Winkler firm signs contracts to build refineries in the Soviet Union, even though the U.S. broke diplomatic relations with Russia following the communist revolution more than a decade earlier. The contract is worth $5 million is 1929 dollars.

1930
By the spring, more than 3.1 million Americans are unemployed.

1931
In February, there are food riots, with starving Americans standing in breadlines at the peak of winter. The unemployment rate rose to more than 15%.

1932'
Fred Koch, flush with his money from Stalin’s Soviet Union, meets Mary Robinson and marries her. They commission the building of the family mansion in Wichita, Kansas.

In November, Democrat Franklin Delano Roosevelt wins the White House over the incumbent, Republican Herbert Hoover–with the support of laborers, the black vote, and immigrant communities of citizens.

Meanwhile, Japan completes its take-over of Manchuria and enslaves the population by putting millions into forced labor.

Soviet police confiscate food in farming regions in Ukraine, as peasants faced starvation and famine along with forced collectivization.

1933
Adolf Hitler is appointed Chancellor of Germany and he begins consolidating power, with President Hindenburg in a figurehead role.

Hitler bans Jews and non-Aryans from practicing law in Germany. He urges the boycott of Jewish businesses and also bans trade unions.

Frederick R. Koch is born to Fred and Mary Koch.

Germany and Japan leave the League of Nations.

1934
Fred Koch works with U.S. businessman and Nazi sympathizer William Rhodes Davis to begin building a large refinery in Hamburg, Germany, after Hitler personally approves the plan, according to Mayer.

With Hindenburg’s death, Hitler declares himself the “Fuhrer” of Germany and seizes complete control of the government.

In the U.S., Roosevelt’s Civil Works Administration begins employing Americans to build bridges, roads, and hospitals, while the country faces the prolonged drought of the Dust Bowl. The unemployment rate falls to 21%. Sweden becomes the first country to recover from the Great Depression using Keynesian deficit spending.

Meanwhile, Japan renounces treaties with the U.S. and the U.K., and the depredations and terror under Stalin are documented in the U.S. press.

1935
Fred Koch continues to aid the Hitler regime by completing the German petroleum cracking complex with a capacity to process more than 1,000 tons of crude a day and refine it into high-octane (jet) fuel, according to Mayer.

Roosevelt gets the Rural Electrification Administration passed and the National Labor Relations Act, which protected workers’ rights to organize, became law. Unemployment fell to under 20%, and the U.S. auto industry begins making a comeback. The Social Security Act is signed into law to provide income security for older Americans.

Hitler‘s Reichstag approves the Nuremburg Laws that strip Jewish Germans of their citizenship and forbid marriage between Jews and “Aryan” German citizens.

Fred Koch‘s second son, Charles Koch, is born. At some point in the mid-1930s, according to Mayer, the Kochs hire a Nazi governess to help raise their boys.

1936
Japan signs an alliance with Hitler‘s Germany. Germany violates the Treaty of Versailles through its re-militarization. Stalin begins the “Great Purge,” the systematic killing of dissidents in the Soviet Union. The summer Olympic games are held in Berlin. Italy conquers Ethiopia. The Spanish Civil War begins.

The U.S. unemployment rate drops to 16%, and Roosevelt wins re-election by a landslide.

1937
Italy joins the Axis alliance with Germany and Japan. Italy leaves the League of Nations. Japan invades Shanghai, China, and begins a brutal march on Nanking, with vast war crimes reported after the takeover was complete.

Roosevelt gets the Housing Act passed to provide subsidies for housing for low-income families. Unemployment falls to 14%, but Roosevelt fears another depression. He also calls for international cooperation against aggression by other nations.

Fred Koch, on one of his visits to Germany, is purportedly delayed for a trip on the Hindenburg blimp when the airship catastrophically exploded, according to Mayer, who noted this was family lore.

1938
Germany annexes Austria and part of Czechoslovakia. Under Hitler’s new laws, the assets of Jews can be seized and property confiscated.

The Roosevelt administration meets with other nations to discuss the growing migration challenges of Jews in Europe.

1938
1938 is the year, according to Mayer, when Fred Koch declared publicly: “Although nobody agrees with me, I am of the opinion that the only sound countries in the world are Germany, Italy, and Japan, simply because they are all working and working hard” and “The laboring people in those countries are proportionately much better off than they are any place else in the world. When you contrast the state of mind of Germany today with what it was in 1925 you begin to think that perhaps this course of idleness, feeding at the public trough, dependence on government, etc., with which we are afflicted is not permanent and can be overcome.”