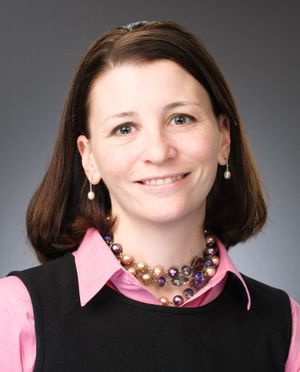 Heather Young Anichini has been President and CEO of the Chicago Public Education Fund (CPEF), since 2012. CPEF describes itself as “one of the first city-based philanthropic venture funds in the nation.” It supports school reform efforts throughout the city by investing in principal leadership programs. “In her role, Heather oversees all aspects of Fund programs and operations, including strategic investments, board governance, staff management, finance, fundraising and communications. In late 2013, Heather and her team launched Fund 4, a $24 million effort designed to more than double the number of high-quality principals in Chicago by 2018, and to enable educator teams to transform public schools...Prior to her work with The Fund, she championed Teach For America’s efforts to build pathways for their alumni to stay in education as teacher-leaders, principals, and superintendents, helped Chicago Public Schools launch a new school-based strategic planning process, and consulted with local Chicago nonprofits as they worked to build their program evaluation capacity.”[1][2]

Young Aranchini also was a “top education adviser” to Chicago Mayor Rahm Emanuel.[3] “Heather has an undergraduate degree in Journalism and Political Science from Marquette University, where she was recognized as the ‘Young Alum of the Year’ in 2017. She has advanced degrees in Curriculum & Instruction, Public Service, and Administration from several regional universities. She is a certified teacher and building administrator in Illinois. She has served on nonprofit and charter school boards, and remains an active volunteer in her community.”[1] Young Anichini graduated from the Broad Academy with the 2015 to 2016 cohort.[4]

According to LittleSis.org, the Chicago Public Education Fund has received millions of dollars in donations from individuals connected to hedge funds and investment firms. The following individuals have donated $1 million or more: Sam Zell, chairman of Equity Group Investments; Kenneth Griffin, president of Citadel Investment; Anne Dias-Griffin, operator of the hedge fund Aragon Global Management; Brian P. Simmons, founder and partner of CHS Capital; and Tim Schwertfeger, former chairman and CEO of Nuveen Investments. Furthermore, the Fund has also received a $500,000 donation from the Goldman Sachs Foundation and $250,000 from the JPMorgan Chase Foundation.[7]

As of February 2018, several executives of hedge funds and investment firms were members of the board of directors for Chicago Public Education Fund. Brent Gledhill, global head of investment banking for William Blair & Company, is its chairman. Furthermore, Kenneth C. Griffin, the founder and CEO of Citadel, was serving as vice chairman of the board. At Citadel, he led “one of the world’s largest alternative asset managers and securities dealers,” including “single-strategy hedge funds.”[8][9] Furthermore, the following individuals with ties to the hedge fund and investment industry also served on the board of directors for the Chicago Public Education Fund, and several of them have made large donations to the Fund:[10][7]

Illinois Gov. Bruce Rauner’s family foundation donated $500,000 to the Chicago Public Education Fund in 2012, and personally, he and his wife “have given the fund ‘many millions of dollars’ over the years.” Rauner has also served on the Chicago Public Education Fund’s board of directors for over 10 years, and as of February 2018, he is still listed as one of their directors.[11][10] Rauner has been a major backer of school choice efforts and the school reform efforts of the Chicago Public Education Fund. The Chicago Tribune disclosed an email from Rauner to “wealthy activists” from December 2011 where he stated “that half of CPS teachers ‘are virtually illiterate’ with a ‘hostile union’ and half the principals are ‘incompetent.’” In 2016, Rauner also “led unsuccessful Republican efforts to try to force a state takeover of CPS in a move viewed as a precursor to declaring the district bankrupt.” He’s also likened Chicago public schools to “crumbling prisons.”[12]

In 2015, the Chicago Public Education Fund became ensnared in a kickback scandal that involved Chicago Public Schools (CPS) CEO Barbara Byrd-Bennett and SUPES Academy, where she used to work. The SUPES training program was initially launched with $380,000 of seed money from the Chicago Public Education Fund before Young Anichini took over as its president and CEO, and the Fund continued to support the program “early in Anichini’s tenure but later withdrew its backing.” With support from CPS, “SUPES contracts increased from just a $300,000 pilot program to a $20.5 million no-bid contract that was approved by the school board in June 2013.” This contract caught the attention of regulators and was under federal investigation in 2015, who demanded CPS “records related to the Chicago Public Education Fund.” By 2016, Byrd-Bennett was scheduled to be sentenced for her role in the kickback scheme, after pleading guilty to the charges, as were the co-owners of SUPES. At that time, Young Anichini stated that SUPES failed to train principals through its program, while also failing “in many other ways.”[11][3]