From SourceWatch
(Redirected from Ian R. Plimer)
Jump to navigation Jump to search 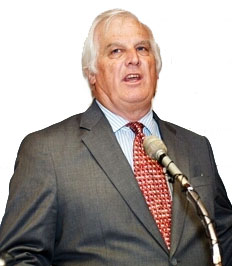 Ian Plimer
Quote: "... you can double [carbon dioxide] and quadruple it and it has no effect ... To demonise it shows that you don't understand school child science. (Ian Plimer, interviewed on ABNNewswire, June 2009[1])

Ian R. Plimer (born February 12, 1946), a mining geologist, mining company director and anthropogenic global warming denier with no evident expertise in climate science, has written the "denier's bible", a book called Heaven and Earth, which makes mutually-inconsistent claims[2] and was panned as being riddled with errors. In 2011 he wrote the "anti-warmist manual" How to Get Expelled From School: A guide to climate change for pupils, parents and punters, which reviewers found to be full of scientific errors, containing flawed and undocumented diagrams, and sloppily edited.[3][4][5]

A biographical note on the Ivanhoe Australia website states that Plimer "has previously been on the staff of North Broken Hill Ltd, and is a prominent Australian geologist who has spent most of his industry, consulting and scientific life working on base metal deposits, particularly in Broken Hill, epithermal gold deposits, especially in the Mediterranean, and tungsten-tin-molybdenum deposits. He has predicted and discovered a number of epithermal gold deposits in the Mediterranean."[6]

Plimer is listed as an associate of the Institute of Public Affairs,[7][8] a conservative think tank with close ties to the Liberal Party of Australia.[9] In 2007, Plimer was listed as an "allied expert" for the Natural Resources Stewardship Project, a Canadian anti-Kyoto Protocol advocacy group.[10] In November 2009, Plimer was named as a member of the academic advisory council for Nigel Lawson's global warming skeptic group, the Global Warming Policy Foundation.[11]

As part of his employment agreement with Ivanhoe, Plimer can forgo annual directors fees of $65,000 in return for a total of 100,000 share options "for nil consideration." The options are available in four installments on September 1 each year from 2008 through to 2011, subject to Plimer continuing in employment with the company.[17] (Ivanhoe Australia, which has an interest in uranium exploration, stated in its 2008 prospectus that "one of the arguments for nuclear energy is its substantially reduced level of carbon emissions".)[18] Plimer is also non-executive Director and Deputy Chairman of Kefi. He has 3.6 million shares in Kefi which, at the July 2010 value of 8 to 95 British pence each, would be worth between £288k and £3.42M.[19][20][21] CBH Resources paid him $A125,000 in 2009 and $A181,003 in 2008. As of June 2009, Plimer had options on 3,569,633 CBH Resources shares.[22] At the early November 2009 share price of .10, Plimer's options would be worth approximately $A356,963.. However, CBH's annual report does not list details of what price, if any, the options would be available at or when they would have to be exercised by.

Plimer claims that his mining company directorships have no impact on his beliefs,[12] even though he has extensive financial interests in mining companies that would be negatively affected by any limits placed on carbon emissions. Plimer himself has argued that the proposed Australian carbon-trading scheme could decimate the Australian mining industry,[23] and "probably destroy it totally",[24] as well as creating "massive unemployment".[24]

In 2012, Plimer was appointed to the boards of Roy Hill Holdings, Queensland Coal Investments and the new Hope Downs iron ore mine by Australia's richest woman, Gina Rinehart. Rinehart, like Plimer an AGW denier, is openly contemptuous of any attempts to constrain greenhouse gas emissions.[25]

Plimer's denialist book on global warming was published in 2009 and sold about 20,000 copies in Australia and a similar amount in the USA. The book was universally panned by scientists as full of errors and even accused of plagiarism.[26]

Ian Enting compiled "the definitive list of errors" for the book.[27]

Plimer was cited by the leader of the Australian Liberal Party, Tony Abbott,[28] in dismissing the IPCC and its findings:

"I think that in response to the IPCC alarmist - in inverted commas - view, there've been quite a lot of other reputable scientific voices. Now not everyone agrees with Ian Plimer's position, but he is a highly credible scientist and he has written what seems like a very well-argued book refuting most of the claims of the climate catastrophists."

Abbott's views on global warming and carbon trading were subsequently described by the man he unseated for the position of leader, Malcolm Turnbull, as "bullshit".[29]

After the publication of his book met with harsh criticism from The Guardian's George Monbiot, who derided the book, saying that "Since its publication in Australia it has been ridiculed for a hilarious series of schoolboy errors, and its fudging and manipulation of the data",[30] Plimer challenged Monbiot to a public debate on the issues covered in the book. Monbiot responded by insisting that Plimer, who is known for his "Gish Gallop"[31] approach to debates (a rapid-fire presentation of arguments and changing topics very quickly),[32] first answer a series of written questions for publication on the Guardian's website.[33] Plimer refused and Monbiot labeled Plimer a "grandstander" with a "broad yellow streak" who has never answered the accusations of serious errors in his Heaven and Earth book, and accused him of trying to "drown out the precise refutations published by his book's reviewers".[34] Plimer then reversed his decision, and agreed to answer written questions in return for a live debate.[35] However, instead of the expected answers, he sent a series of questions to Monbiot.[36][37][38] Negotiations with Plimer for a face-to-face debate eventually broke down and no debate was held.[39][40]

The two did eventually cross swords on the Australian Broadcasting Corporation program Lateline in December, 2009.[41] After the debate, Monbiot published an article in The Guardian summarising the debate and stated that Plimer had been "soundly thrashed".[42] The video shows Plimer obfuscating, refusing to answer questions, and clearly discomforted when his erroneous scientific statements about global warming were directly challenged.

Peter Jackson of the Canadian paper, The Telegram, summarised the debate so: "For Plimer, it was an unmitigated disaster. He fudged and distracted at every turn like a senile old goat. In the end, he refused to answer a single question put to him by Monbiot or the moderator. His credibility - and that of his book - withered away into oblivion."[43]

Plimer holds some unusual views on a variety of weather-related topics. He believes that El Niño is caused by earthquakes and volcanic activity at the mid-ocean ridges.[44] This contrasts with the view held by the meteorological and oceanographic communities, which is that El Niño arises from dynamical interactions between the atmosphere and ocean.[45] Plimer told Radio Australia that Pacific island nations are seeing changes in sea level not because of global warming, but due to "vibration consolidating the coral island sands", extraction of water, and extraction of sand for road and air strip making.[46]

In his review of Heaven and Earth for The Australian, astronomer Michael Ashley[1] wrote:[47]

"Plimer probably didn't expect an astronomer to review his book. I couldn't help noticing on page120 an almost word-for-word reproduction of the abstract from a well-known loony paper...[that] argues that the sun isn't composed of 98 per cent hydrogen and helium, as astronomers have confirmed through a century of observation and theory, but is instead similar in composition to a meteorite."

"It is hard to understate the depth of scientific ignorance that the inclusion of this information demonstrates. It is comparable to a biologist claiming that plants obtain energy from magnetism rather than photosynthesis."

Plimer's central thesis[48] is that volcanoes emit more carbon dioxide (CO2) than humans. Plimer claims that submarine volcanoes, in particular, emit huge amounts of CO2 and that the influence of the gasses from these volcanoes on the earth's climate is drastically underrepresented in climate models.[49]

George Monbiot[50] and The Guardian columnist James Randerson[51] dispute Plimer's argument, stating that humans emit 130 times more CO2 than volcanoes based on calculations made by the U.S. Geological Survey.[52] During a debate between Plimer and Monbiot on Australian television,[53] Plimer stated that the USGS had failed to take into account the CO2 emitted by submarine volcanoes. The host responded that a UK journalist had in fact gone back to the USGS and asked it whether or not submarine volcanoes were included in its calculations, and the USGS said that they were. Plimer responded that there are many huge undersea volcanoes which are not known about or measured.[50][54]

Climate scientists Gavin Schmidt of NASA and Barry Brook[55] of the University of Adelaide also dispute Plimer's position on this issue,[56] as does lead IPCC author David Karoly.[57] Karoly points out that Plimer is completely wrong on this issue, saying that:

The United States Environmental Protection Agency (EPA) has stated that Plimer's statement "has no factual basis" since "Volcanoes are only responsible for a couple of hundred megatons per year of CO2 —a couple of orders of magnitude smaller than human emissions— and are balanced by deep ocean burial", and because volcanoes produce 200 million tons of CO2 a year compared with 600 million tons from U.S. passenger cars alone.[58][59]

Climate scientist Brook finds it "rather strange" that Plimer argues for volcanoes as the cause of rising CO2, after trying to convince his audience that CO2 is an unimportant trace gas and doesn’t change climate anyway.[55]

On a 60 Minutes chat in 2006, Plimer stated that "volcanoes that leak out carbon dioxide have caused global warming in the past",[60] a statement that starkly contrasts with his later claims that CO2 levels have no effect on climate.

In 2008, Plimer claimed that white asbestos, known as chrysotile, is not really asbestos, whereas the U.S. Department of Health and Human Services calls it the most common form of asbestos.[61] Plimer went on to assert that chrysotile is not a carcinogen, even though in 2008 the WHO (World Health Organisation) said it was a carcinogen, and so do medical authorities throughout the world.[62]

By 2011, Plimer no longer denied that chrysotile was a carcinogen, but still denied that it was a form of asbestos;[62] NIH's Report on Carcinogens, Twelfth Edition  (2011) says that "asbestos is the generic name for a group of six naturally occurring fibrous silicate minerals, including the fibrous serpentine mineral chrysotile...".[63]

During the United Nations Climate Change Conference 2009 (COP15), Plimer spoke at a rival conference in Copenhagen called the Copenhagen Climate Challenge,[64] which was organised by an Exxon-funded lobby group called Committee for a Constructive Tomorrow.[65][66] While COP15 attracted 33,200 delegates, the rival sceptic conference was attended by 60 people (15 journalists, 18 speakers, 27 audience).[64] According to Lenore Taylor of The Australian, the attendees had an average age "well over 60".[67] In closing his speech, Plimer stated that “They’ve got us outnumbered, but we’ve got them outgunned, and that’s with the truth.”[64] Plimer also stated that "It's been freezing in Perth and bucketing down". In fact, Perth (Western Australia) had below average rainfall in 2009, and, as Plimer spoke, temperatures in Perth reached 38°C (100°F);[68] while 2011 proved to be Perth's hottest year on record.[69]

Plimer is an outspoken critic of creationism and wrote a book called Telling Lies for God: Reason vs Creationism. Creationists claim Plimer makes numerous scientific errors in this book.[70]

In the late 1990s, Plimer engaged in a quixotic and ultimately self-defeating battle with creationists. He went to court alleging misleading and deceptive advertising under the Trade Practices Act 1974 against creationist minister Allen Roberts, arising from Plimer's attacks on Roberts' claims concerning the location of Noah's Ark. Leading up to this, Plimer was forcibly ejected by police from several public meetings at which Roberts spoke. The court ruled that although the minister had indeed made false and misleading claims, they were not made in the course of trade or commerce, so Plimer lost the case,[71] and was ordered to pay his own and Roberts' legal costs estimated at over AU$500,000.[72][73][74]

Plimer's debating style has been criticised as counterproductive by some of his fellow skeptics. He was criticised for making false claims and errors in his debates with creationists by skeptic Jim Lippard.[75]