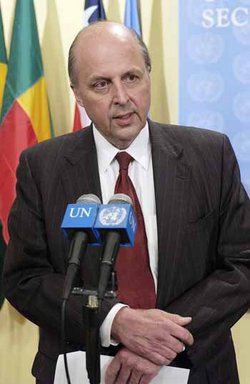 John Dimitri Negroponte is Deputy Secretary of State, second in command to Condoleezza Rice in the U.S. Department of State, since February 13, 2007. He was formerly Director of U.S. intelligence.[1] Retired Admiral Mike McConnell, National Security Agency director from 1992 to 1996, was sworn in February 13, 2007 to replace Negroponte as Director of U.S. intelligence. [2]

Negroponte fills "a pivotal foreign policy position that has been vacant since Robert B. Zoellick resigned to take a post at Goldman Sachs," Mark Mazzetti of the New York Post wrote.

He is married to Diana Villiers Negroponte.

"Bush said that Negroponte understands global intelligence needs because he's had a long career in the foreign service. Bush also said that Negroponte will make decisions on the budgets for the various intelligence agencies. ... 'John will make sure that those whose duty it is to defend America have the information we need to make the right decisions,' the president said."

Although Negroponte's office will be "outside of the West Wing," Bush said that Negroponte "'will have access on a daily basis in that he'll be my primary briefer'. ... Negroponte said he plans to 'reform of the intelligence community in ways designed to best meet the intelligence needs of the 21st century.'" [1]

(See Office of the Director of National Intelligence for more details on the role of the agency.)

Negroponte at the United Nations

Since September 2001, Negroponte served as the United States Representative to the United Nations. On April 19, 2004, President George W. Bush nominated Negroponte to become U.S. Ambassador to Iraq following the projected June 30, 2004, handover of sovereignty to as yet undetermined Iraqi authorities. [2] [3]

When, in early 2001, Negroponte was nominated by Bush to be appointed as United States Representative to the United Nations, human rights groups opposed, and a concerned Senate questioned, his nomination, causing a six-month delay in his ulimate appointment, which was acceeded to after September 11, 2001.

Despite his complicity in supporting Nicaraguan death squads during the Iran-Contra affair and his support of the brutal military dictatorship of General Gustavo Alvarez Martínez in Honduras, Negroponte's Senate confirmation as U.S. Ambassador to Iraq went smoothly.

The Senate confirmed the nomination by a vote of 95-3 on May 6. He was sworn in on June 23. Negroponte will head a U.S. embassy in Baghdad that will be temporarily housed in a palace that belonged to Saddam Hussein. When up and running, the embassy will be the largest in the world, with a diplomatic staff of over 3,000 personnel. [4]

Shortly after taking up the position, Negroponte was asked about eyewitness statements that in late June Iraq's interim prime minister, Ayad Allawi had personally executed up to six suspected 'insurgents' in front of his U.S. military bodyguards. (Allawi denies the accusation). In an email to the Sydney Morning Herald, Negroponte did not attempt to deny the story. "If we attempted to refute each [rumour], we would have no time for other business. As far as this embassy's press office is concerned, this case is closed," he wrote. [5]

In November 2002, it was Negroponte that was U.S. point man steering a compromise resolution through the United Nations Security Council stepping up the pressure on Iraq. "As we have said on numerous occasions to Council members, this Resolution contains no 'hidden triggers' and no 'automaticity' with respect to the use of force. If there is a further Iraqi breach, reported to the Council by UNMOVIC, the IAEA, or a member state, the matter will return to the Council for discussions as required in paragraph 12. The Resolution makes clear that any Iraqi failure to comply is unacceptable and that Iraq must be disarmed. And one way or another, Mr. President, Iraq will be disarmed," he told the Security Council.

He also delivered a warning to other less hawkish members of the Security Council too. "If the Security Council fails to act decisively in the event of a further Iraqi violation, this resolution does not constrain any member state from acting to defend itself against the threat posed by Iraq, or to enforce relevant UN resolutions and protect world peace and security, he said. [6]

Negroponte faced contention over U.S. intentions during the U.N. debate leading up to the war in Iraq. In March 2003, Negroponte "walked out ... after Iraq's ambassador accused the United States of trying to exterminate the Iraqi people. ... Iraq's U.N. envoy Mohammed Al-Douri charged that the United States had arranged for contracts to rebuild Iraq in 1997, six years before the U.S.-led war began [on March 19, 2003, and] had even planned the carving up of Iraq before Iraq invaded Kuwait in 1990." [7] See war profiteering for current information.

Once again, the matter of humanitarian aid was at issue. Al-Douri, described as nearly "spluttering", said that the "United States now was using the issue of humanitarian aid to hide its 'criminal aggression.' ... The Iraqi envoy urged the Security Council to halt the war in Iraq, saying ending the conflict was even more important than getting humanitarian assistance into the region." [8]

"'Britain and the United States are about to start a real war of extermination that will kill everything and destroy everything,' Al-Douri warned. 'And then their regret will be of no use. ... If the humanitarian issue is very important, it is more important' to halt the war, he said." [9]

Shortly after taking up the position, the Sydney Morning Herald reported that two eyewitnesses had stated that in late June Iraq's interim prime minister, Ayad Allawi had personally executed up to six suspected 'insurgents' in front of four of his U.S. military bodyguards. Allawi's office denied the witness accounts stating that Allawi had never visited the centre and he did not carry a gun.

In an email to the Sydney Morning Herald, Negroponte did not attempt to deny the story. "If we attempted to refute each [rumour], we would have no time for other business. As far as this embassy's press office is concerned, this case is closed," he wrote. [10]

Sydney Morning Herald columnist, Alan Ramsey, wrote of Negroponte's side-stepping. "Of course. One only has to consider Negroponte's record as US ambassador in Honduras to know he is a loyal servant of Republican Washington who sees and knows nothing ... This same man, with an embassy regime of more than 1000 American 'foreign service officers', plus American advisers 'salted throughout Iraqi ministries' as well as 140,000 US military personnel, now has absolute covert power in Iraq. Of course 'the case is closed', he wrote. [11]

Negroponte was born in London in 1939, the son of a Greek-American shipping magnate. [12]

A graduate of Yale University, he was a career diplomat between 1960 and 1997 serving in eight countries in Asia, Europe and Latin America as well as positions in the Department of State and the White House.

According to Foreign Policy in Focus, from 1971 to 1973, Negroponte was the officer-in-charge for Vietnam at the National Security Council (NSC) under Henry Kissinger [13] While in Vietnam, Negroponte and Richard Holbrooke shared a room.

Among his more recent assignments Negroponte was:

From 1997 to 2001 Negroponte worked as Executive Vice President for Global Markets of The McGraw-Hill Companies.

NOTE: The section of this article on Negroponte's role in Honduras reproduces part of the Wikipedia profile of Negroponte.