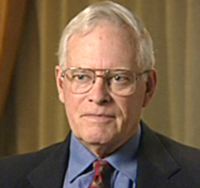 John Tanton M.D. is an anti-immigrant activist "known for his racist statements about Latinos, his decades-long flirtation with white nationalists and Holocaust deniers, and his publication of ugly racist materials," according to the Southern Poverty Law Center (SPLC).[1] He is the publisher of The Social Contract (designated as a "hate group" by the SPLC)[2] and served as editor for its first eight years. His white supremacist ideology apparently had its roots in his 1970s environmental advocacy. According to his biography at The Social Contact Press, "He is a retired eye surgeon whose boyhood on a farm made him into an ardent conservationist and advocate for the environment. His conviction that continued human population growth was a large part of the conservation problem led him to chair the National Sierra Club Population Committee (1971-74), and to the national board of Zero Population Growth (1973-78, including a term as president, 1975-77)."[3]

In 1979, Tanton shifted his focus towards fighting immigration to reduce the U.S. population, and organized the anti-immigrant Federation for American Immigration Reform (FAIR), based in Washington, D.C. Since then, Tanton has formed, funded, or otherwise been affiliated with many prominent anti-immigration organizations, in what has been termed the John Tanton Network.[4]

In 2013, John Tanton's anti-immigration ideals and networks have re-emerged in the mainstream media in heavy opposition to an immigration reform framework introduced by a bipartisan group of senators in January.[5] These anti-immigration groups in the John Tanton Network have received millions of dollars from the Scaife Foundations -- this report describes the close relationship Tanton holds with Cordelia Scaife May.[5] The Tanton-founded and funded organizations have released numerous statements about the negative implication of this reform bill, including the hyperbolic claim that it "has the potential to change everything that makes America a great place to be."[6]

The Southern Poverty Law Center reports that Tanton has long been linked to racist ideas -- "fretting about the 'educability' of Latinos, warning of whites being out-bred by others, and publishing a number of white nationalist authors" -- and is also closely affiliated with a number of white supremacist organizations such as the Pioneer Fund.[7]

"He is co-author with Wayne Lutton of The Immigration Invasion, and has written numerous editorials and opinion pieces, including 'End of the Migration Epoch.'"[3]

Tanton has been affiliated with the following organizations as of 2008 (according to the Institute for Policy Studies, unless otherwise noted):[8]: