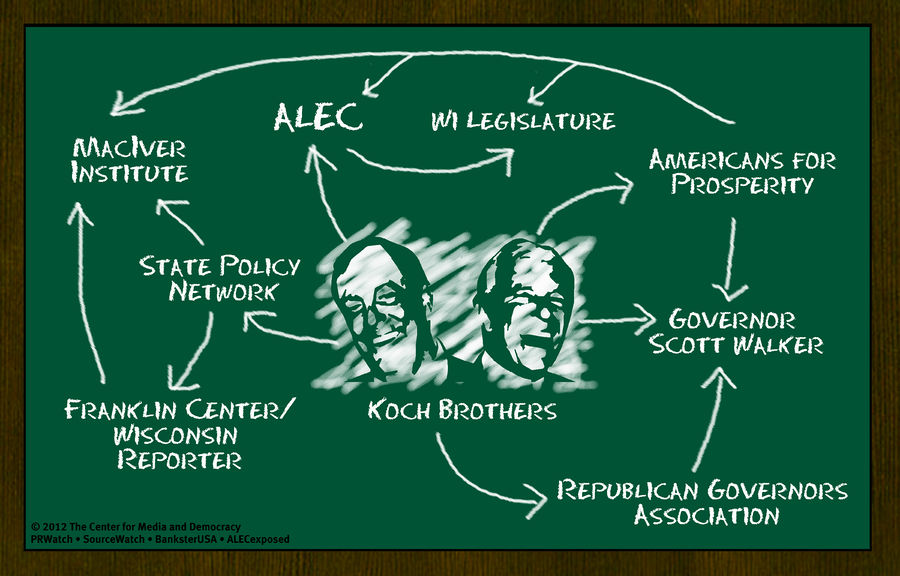 Koch → ALEC: Koch Industries has been on ALEC's governing Private Enterprise Board for many years. Koch funds ALEC, both through the membership dues and sponsorship fees paid by Koch Industries, and through direct contributions from Koch family foundations.

Americans for Prosperity (AFP)→ Wisconsin Legislature: AFP has helped Wisconsin Senators facing recall in 2011 and 2012 through six figure ad buys, rallies, and direct mailings, and was accused of trying to suppress the Democratic vote.

Americans for Prosperity (AFP)→ MacIver Institute, Governor Scott Walker: AFP has teamed up with the MacIver Institute to produce a multi-million dollar campaign called "It's Working!" -- a series of ads and townhall meetings asserting that Governor Scott Walker’s severe cuts to education and his dramatic repeal of the rights of public workers are “working,” in advance of Walker’s June 2012 recall election campaign.

Americans for Prosperity (AFP) → ALEC: AFP is a member and funder of ALEC.

Koch → Republican Governors Association (RGA): David Koch has given two $1 million donations to the RGA in the last two years. The RGA spent millions to help Walker get elected in 2010, and is spending millions more to support him in the June 2012 recall election.

Koch → Governor Scott Walker: KochPAC was one of Walker's top donors in the 2010 elections, giving the maximum $43,000 to his campaign. The Kochs also indirectly supported Walker via contributions to the Republican Governor's Association, which spent millions on ads to help Walker get elected. As Walker's opponents began gathering signatures for his recall in November 2011, the Koch-founded-and-funded Americans for Prosperity began running ads touting the "successes" of Walker's reforms. In February 2012, David Koch was asked about his support for Walker. "We're helping him, as we should," Koch said. "We've spent a lot of money in Wisconsin. We're going to spend more." The AFP ad campaign has reportedly cost at least $2.9 million. David Koch gave another $1 million contribution to the RGA in 2012. Additionally, Walker has received at least $1.3 million in recall campaign contributions from donors who attended secretive right-wing fundraisers organized by Charles and David Koch.