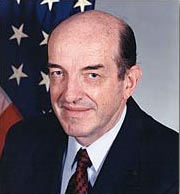 Michael Joseph Copps, of Virginia, is a Comissioner of the U.S. Federal Communications Commission.

On November 9, 2005, President George W. Bush announced his intention to nominate Copps to be Commissioner of the Federal Communications Commission "for the remainder of a five-year term expiring June 30, 2010. Since 2001, Mr. Copps has served as Commissioner of the Federal Communications Commission. Prior to this, he served as Assistant Secretary of Commerce for Trade Development at the Department of Commerce, where he was previously Deputy Assistant Secretary of Commerce for Basic Industries. Earlier in his career, Mr. Copps served for over 12 years as Chief of Staff for Senator Ernest Hollings. He also served as Director of Government Affairs at Collins and Aikman. Mr. Copps received his bachelor's degree from Wofford College and his PhD from the University of North Carolina at Chapel Hill."

In April 2005 Copps and fellow Commissioner Jonathan S. Adelstein wrote in support of the clear labelling of video news releases (VNRs). Copps wrote "People in this country have a right to know where their news is coming from, but it’s getting almost impossible to know. Everyone understands that a story cannot be judged without knowing its source, but increasingly the source goes unreported ... In this era of huge corporate media, it has gotten just about impossible to tell the difference between news and entertainment or to differentiate between legitimate information and propaganda. Knowing the source of a story can help viewers and listeners judge its substance." [1]

Copps also indicated that the scope of the rules went way beyond just the controversy over government-sponsored VNR's. "These recent allegations, as well as other reports of payments involving local news shows, commentators and airtime for recording artists, highlight the need for stepped-up focus on these obligations," he wrote.