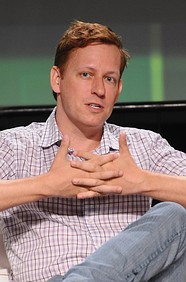 Peter A. Thiel "is a hedge fund manager, venture capitalist, and major political donor who generally supports libertarian or small-government causes. Thiel is a Research Fellow and Member of the Board of Directors at the Independent Institute. He is Founder and Managing Member of Clarium Capital Management, LLC, and Founder and former Chairman and Chief Executive Officer of PayPal, Inc. Past president of Thiel Capital International and chairman and Chief Executive Officer of Confinity, Inc., Mr. Thiel has worked as a derivatives trader at Credit Suisse Financial Products, a securities lawyer for Sullivan & Cromwell, speechwriter for former Education Secretary William J. Bennett, and a law clerk for Judge Larry Edmondson of the U. S. Court of Appeals. Thiel is also on the board of directors for the Pacific Research Institute [1] He is currently worth $1.5 billion. [2]

During the 2012 election cycle, Thiel was a major supporter of Club for Growth's SuperPAC, Club for Growth Action. Thiel gave the group $2 million in two donations in the summer of 2012. Thiel was also the primary donor to Endorse Liberty was a major supporter of Ron Paul in the 2012 election cycle. Theil gave the group a total of $2.5 million in various donations from 2011 and 2012. [3]