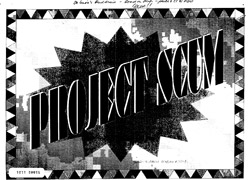 RJR's rationale for the project was its recognition of the higher incidence of smoking and drug use among these subcultures.

There are several versions of the "Project Scum" documents, ranging in date from 1995-97. Each offers revealing marginalia (handwritten markings on the page). For example, in one version, handwritten in next to a bulleted list of consumer subcultures are the words "Gay/Castro" and "Tenderloin." A line discussing the company's rationale for the program says "higher incidents [sic] of smoking in subcultures" and has the phrase "and drugs" handwritten in.[1] On another copy, the phrase "and drugs" is crossed out, revealing RJR's ambivalence about their exploitation of, and standing in the drug culture.[2] On a 1996 version, the title page has the word "SCUM" crossed out and the word "Sourdough" handwritten in, as though RJR marketers realized too late the derogatory commentary they had slapped on their bread-and-butter clientele.[3]