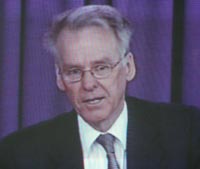 Ralph Hillman was the Executive Director of the Australian Coal Association (ACA), a lobby group for Australia's black coal mining companies. Hillman was appointed to the position in mid-August 2007,[1][2] succeeding Mark O'Neil, who had been in the position for the previous seven years.[3]

In late August 2011 the ACA abruptly announced that Hillman was retiring at the end of the month but stated that he would "continue with the ACA in an advisory capacity and look forward to his further contribution to the industry."[4] The following week the ACA announced that it had appointed NSW Minerals Council CEO, Nikki Williams, to head the organisation.[5]

On Carbon Capture and Storage

In 2007 he was asked whether 'clean coal' technology would be commercially viable in time to avoid dangerous climate change, Hillman said "I can't answer the question: are we doing it fast enough? But we are now doing it as fast as we can without going onto some sort of war footing".[6]

A biographical note states that in August 2007 Hillman was appointed as Executive Director of the Australian Coal Association, a lobby group for Australia's black coal companies. The note states that "he was formerly a senior career officer of the Australian Department of Foreign Affairs and Trade and has extensive experience in multilateral economic policy and diplomacy. He was Ambassador for the Environment and chief negotiator for Australia on the Kyoto Protocol from 1998 to 2002. He was Ambassador and Permanent Representative to the OECD from 1995 to 1998. From 1994 to 1995 Mr Hillman was Chief Economist in the Department. He also served in other senior positions in the Department and at overseas missions in Brussels, Brasilia, the OECD and at the Asian Development Bank."[2]

At the time of his appointment to the ACA in 2007 the group stated that "Mr. Hillman comes to the Association after a distinguished career in the Commonwealth Government, including as a former Australian Ambassador for the Environment and Ambassador to the OECD, head of the Trade Development Division of the Department of Foreign Affairs and Trade, and currently Executive Director, Industry and Government Relations at the Export Finance and Insurance Corporation."[1]