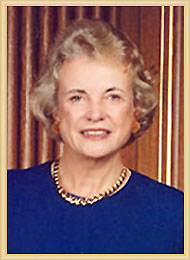 Sandra Day O'Connor was nominated by President Ronald Reagan as Associate Justice of the United States Supreme Court on July 7, 1981; was confirmed by the United States Senate on September 22, 1981; and took oath of office on September 25, 1981. Justice O'Connor was the first female on "the high court." On July 1, 2005, she notified the President that she will retire "effective upon the nomination and confirmation of my successor."

Civic and other Associations