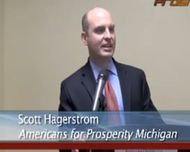 AFP Michigan's director, Scott Hagerstrom, advocates "taking the unions out at the knees"

A video published on YouTube on February 26, 2011 shows Scott Hagerstrom, the executive director of Americans for Prosperity Michigan, advocating "taking unions out at the knees so they don't have the resources" to fight for workplace benefits or political candidates. [2]