Yala Swamp is a "vast wetland protecting the mouth of the Nzoia River and the north-eastern shore of Lake Victoria in Kenya. Lake Kanyaboli, which still shelters some of the fish species that have disappeared from Lake Victoria, is part of the Yala Swamp complex.

"The swamp's large stand of papyrus reeds and other sedges collect water during the rains, stabilizes the muddy soil, traps sediment and filters pollutants. These ecological services help to keep Lake Victoria waters clear, reduce soil erosion and minimize the impacts of floods."[1] It is also home to a number of bird species, including papyrus endemics - birds only found in papyrus swamp habitat. However, currently Yala Swamp is being converted into a massive industrial agricultural operation by Dominion Farms Limited, an Oklahoma-based company that produces rice, bananas, and tilapia. Yala Swamp is located in Siaya District, Nyanza Province and Busia District, Western Province.[2] Ramogi Hill, a sacred site to the Luo people, is contained within the swamp.

"Kenya's wetlands, covering 14,000 km2, are a resource of great social-cultural and economic potential (Gichuki, 1990). Many of Kenya's rural communities draw food, medicinal products, fuelwood, materials for building and handicraft from wetlands. However, these ecosystems are today facing a serious threat to their continued existence from encroaching human development activities, especially agricultural operations."[3]

Ceremonial Uses In the region of Yala Swamp and the Nzoia River, the Bukusu subgroup of the Luhya people traditionally use secluded areas within wetlands for circumcision ceremonies, in which young men "smear themselves thoroughly with mud, and then walk naked back home."[3]

Hunting and Gathering Both the Luo and Luhya people use wetlands to hunt birds and other wild animals. "According to Ogutu (1987) the points at which the Rivers Yala and Nzoia enter Lake Victoria were swampy and bush enough for the water-related beasts to inhabit, thus, the hunters could easily lay traps in these concealed areas for big animals, such as the Hippopotamus 'rawo' (which were fairly numerous in olden days), or small rodents such as 'anyier'."[3] The Nyala people also hunted Sitatunga antelope and wild pigs for food. The Luhya people mostly trapped birds, including those found in wetlands. Most of the materials for making basket traps and cages for birds also came from the wetlands (papyrus, bulrushes).

Local people also gathered materials to construct beehives within the wetlands, and honey was then used for local brews and medicine, as well as for food. The Luo and Luhya people also gather wild greens, especially during the dry season, from the wetlands. For example, the Luhya gather 'enderema' and 'lubiliabilia,' which were also used to "cure certain ailments of the stomach."[3] "The fact that land was commonly owned meant that one could collect fruits and vegetables that grew on wetlands without restriction. The changing land ownership system that encourages privatisation of land has somehow reduced the importance of gathering wild greens."[3] 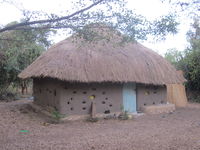 "In building construction, clay of different types was used for plastering the walls and floors of houses (Odak, 1987). The clays varied depending on the local availability but those obtained from wetlands were usually preferred (O. Abok, pers. comm.) Such clays have also been used extensively in providing commodities such as pots of different types and sizes and smoking pipes (Odak, 1987). 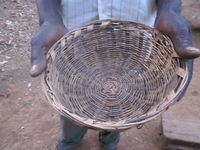 A Luo man holding a traditional basket he made, Bondo District, Kenya. February 23, 2012.

"The herbaceous vegetation from marshes was traditionally harvested with the clay and used in the construction of houses and granaries. Traditional Luhya houses, for example, had walls constructed from a framework of sticks or reeds and the roof was assembled separately from reeds or maize stalks tied to rings of grass or split palm leaves (Were and Soper, 1986)."[3] 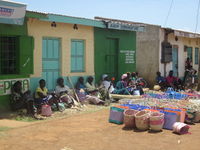 Women making and selling traditional baskets and mats, Bondo District, Kenya. Today, some use plastic instead of reeds and twigs in basket making. February 24, 2012.

Other uses of twigs and grass from the swamp are basket and mat making. "The popular 'marachi' sofas are made from 'amaduru' reeds and branches of the 'isiola' tree. They are often coloured with natural black and yellow dyes made from the water plant 'litodo' (Were and Soper, 1986)."[3]

As of 2012, some Kenyans living near Yala Swamp continue to utilize grass thatching to construct roofs, although those with enough money sometimes opt to use corrugated iron sheets instead.[4]

Fishing Fishing for domestic consumption and for sale is also a traditional use of the Yala Swamp.[3] Traditionally, wetlands were also used as sources of materials to make fishing equipment. For example, the Luhya weave reeds in conical patterns to construct basket traps known as 'evisu' and 'omukono.' Another fish trap is the 'olukhwiro,' which is made of a fence of reeds tied together with papyrus stems that is fastened to fence posts. The Luo also use reeds and papyrus stems to make the 'sienya' basket trap.

Livestock Some people who inhabit the areas near Yala Swamp use the area to graze their livestock.