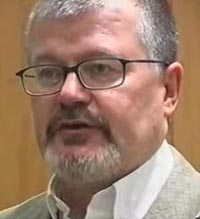 Austin Williams is the "director of the Future Cities Project, author and illustrator at NBS." A brief biographical note states that he is "an architect and project manager by profession, he was previously technical editor of the Architects' Journal and now writes for a wide range of publications on urban and transport issues. He was co-ordinator of the "Future of" series of festivals and is a founder member of ManTowNHuman."[1]

Williams has been described as "one of the founders of the LM group".[2] Between 2002 and 2007 he was a regular contributor to Spiked online.[3] He was also a contributor to audacity.org.

He is also the director of Transport Research Group[4][5] A 2007 biographical note states that he was "editor of Shortcuts: essential guides for building designers" and a "regular columnist in the Daily Telegraph Motoring section and a Visiting Tutor at the Vehicle Design department of the Royal College of Art."[6]

Williams was the organiser, on behalf of the Future Cities Project, of a panel on climate change at the the Battle of Ideas festival at the at London's Royal College of Art, which was organised by the Institute of Ideas. "Williams, picked the panel, and he's on it too. The first article on Austin's reading list to accompany the debate mocks "climate change doom-mongers". Like the Government's chief scientist, Sir David King perhaps? Williams himself adds a sarcastic self-penned piece reviewing a conference on renewable energy," the Press Gazette reported.[8]

A promotional description of Williams's book, The Enemies of Progress: Dangers of Sustainability, stated that "this polemical book examines the concept of sustainability and presents a critical exploration of its all-pervasive influence on society, arguing that sustainability, manifested in several guises, represents a pernicious and corrosive doctrine that has survived primarily because there seems to be no alternative to its canon: in effect, its bi-partisan appeal has depressed critical engagement and neutered politics. It is a malign philosophy of misanthropy, low aspirations and restraint. This book argues for a destruction of the mantra of sustainability, removing its unthinking status as orthodoxy, and for the reinstatement of the notions of development, progress, experimentation and ambition in its place." The book features an endorsement by Frank Furedi.[1]

In the Guardian, John Vidal and David Adam wrote that "when you see the words 'progress' or 'reason' in a book title, you can bet it has been written by an extreme libertarian arguing for the right to pollute, or an ageing Living Marxism cell member - or both. So it is with The Enemies of Progress: The Dangers of Sustainability, a book by Austin Williams that argues, very roughly, that planning is bad, all development is good, and sod the lot of you. Judge for yourself how batty it is with this endorsement from former Sunday Telegraph editor Dominic Lawson: 'A much-needed diagnosis of the bleak anti-human pathology described as environmentalism'."[9]