Gene B. Sperling is President Barack Obama's nominee for the position of Director of the National Economic Council (NEC) for the Obama Administration, as of January 2010, to take the place of controversial NEC Director Larry Summers.

Sperling served in the Clinton Administration, as noted in the background section below, and subsequently held a variety of jobs, including earning almost a million dollars as a "consultant" to Goldman Sachs, according to his financial disclosure form filed in 2009 when he initially joined the Obama Administration as an advisor at the Treasury Department.

He has been involved in a number of very controversial policy decisions, as detailed below. 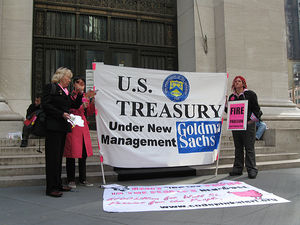 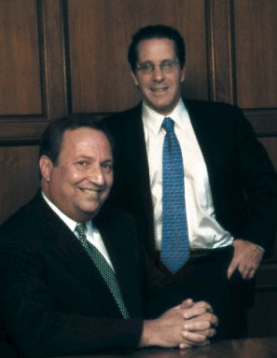 Sperling Standing behind Summers in foreground

Get monthly financial crisis alerts from the Center for Media and Democracy!

Together with United States Trade Representative Charlene Barshefsky, Mr. Sperling successfully negotiated and concluded the China-WTO agreement in Beijing in 1999, paving the way for China to enter the World Trade Organization in 2001. [3] The Economic Policy Institute estimates that 2.4 million U.S. jobs have been lost to China since 2001.[4]

According to Bloomberg News, "Sperling earned $887,727 from Goldman Sachs in 2008 and $158,000 for speeches mostly to financial companies, including the firm run by accused Ponzi scheme mastermind R. Allen Stanford." [5] His prior income for the period between 2001 and 2007 is not publicly available.

In January 2009, Sperling became an official and close adviser to Treasury Secretary Timothy Geithner and NEC Director Larry Summers, after serving as an economic adviser to Obama's transition team and presidential campaign.

During the Bush Administration

According to financial disclosure forms filed in 2009 for the 2008 calendar year, "Sperling was paid $116,653 by the Council on Foreign Relations for work related to education in developing countries."[6] He "supplemented" this salary "through a variety of consulting jobs, board seats, speaking fees and fellowships, to bring his total income to more than $2.2 million in the 13 months ending in January. For example, he was paid $480,051 as a director of the Philadelphia Stock Exchange and $250,000 for providing quarterly economic briefings to two hedge fund firms, Brevan Howard Asset Management LLP and Sterling Stamos Capital Management ... Sperling also drew a $137,500 salary from Bloomberg News for writing a monthly column and appearing on television, according to his disclosure. Goldman Sachs paid Sperling the $887,727 for advice on its charitable giving. That made the bank his highest-paying employer."[7]

Sperling told Bloomberg, "My sole work for Goldman Sachs was as lead consultant on the creation, design, and initial implementation of ‘10,000 Women,’ their $100 million philanthropic effort to give business and leadership education to poor women around the world...." The Center for Media and Democracy has called such philanthropic work that does some good while trying to wash away misdeeds by Wall Street firms and Goldman Sachs in particular "greedwashing."

Among other paid speeches, "Sperling spoke at a Washington event hosted by the Houston-based Stanford Group Co. in November 2008, three months before its chairman was sued by the Securities and Exchange Commission for allegedly bilking investors of $7 billion. He also spoke at a Washington event in October 2007 that was sponsored by Citigroup, which has received $45 billion in government assistance."[8]

This financial disclosure form was required as part of his government appointment (not subject to Senate confirmation) as an advisor to Treasury Secretary Timothy Geithner.

No comparable public reporting was required during the preceding several years he spent in the private sector following his work for the Clinton Administration.

Sperling served as National Economic Adviser and Director of the National Economic Council under President [[William Jefferson Clinton], from 1995 to 2000, after serving as the Deputy Director earlier in the administration. (President William Jefferson Clinton created the Council "in 1993 to coordinate the economic policy process among all cabinet agencies, with respect to both domestic and international economic issues.")[9]

"As Director of the NEC, Mr. Sperling [was] responsible for ensuring that economic policy is consistent with the President's long term goals of maintaining fiscal discipline, making key investments in the American people, and opening foreign markets for American workers, farmers and businesses.

"As National Economic Advisor and NEC Director, Mr. Sperling ... coordinated President Clinton's efforts to institute debt reduction, Save Social Security First, and reform Medicare policies. Mr. Sperling was a principal negotiator for the 1997 Balanced Budget Agreement. He also served as a principal negotiator with Treasury Secretary Lawrence Summers in finalizing the Financial Modernization Bill. Together with United States Trade Representative Charlene Barshefsky, Mr. Sperling successfully negotiated and concluded the historic China-WTO agreement in Beijing. He played a lead role in the design and passage of many of President Clinton's other initiatives, particularly the GEAR-UP mentoring program, the Hope Scholarship Tax Credit, the Workforce Improvement Act, and the Children's Health Insurance Program. He is currently playing a lead role in such initiatives as the New Markets legislation, Debt Relief for Highly Indebted Countries, and the President's goal of universal basic education.

"Mr. Sperling graduated from the University of Minnesota and Yale Law School, and attended Wharton Business School. At Yale Law School he was Senior Editor of the Yale Law Journal. He is a native of Ann Arbor, Michigan, where his parents still live."[11]