Smoking Beagles. The American Cancer Society (ACS) was an early promulgator of the link between smoking and cancer in the landmark epidemiological studies of 1952 and 1959. However, the tobacco industry was able to delay widespread acceptance of this link largely because animals in studies did not develop cancer. [1] 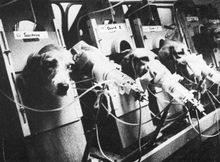 Animal testing was used by politicians to avoid taking action against tobacco companies. Decades of vague and inconclusive results enabled them to perpetuate confusion and prevent doctors from giving authoritative warnings. Researchers spent decades forcing beagles to smoke cigarettes and painting tar on the backs of mice (although there were already clear links between tobacco and human cancer). Physicians were encouraged to keep quiet while researchers spent years performing animal tests. [2], [3]

In tobacco inhalation experiments, dogs, primates, guinea pigs, hamsters, rabbits, lambs, chickens, rodents and other animals are mutilated, pumped full of nicotine and forced to inhale smoke. Dogs are forced to inhale cigarette smoke on mechanical ventilators. In one experiment, researchers cut holes in the throats of beagles' and forced them to breathe concentrated cigarette smoke for an entire year. Other tests have involved inserting electrodes into dogs' penises to measure the effect of cigarette smoke on sexual performance. Masks are strapped on to the faces of rats and mice while cigarette smoke is pumped directly into noses. Rhesus monkeys are confined to chairs with head devices, while being exposed to nicotine and caffeine to study effects on breathing. In 1996, the National Institutes of Health (NIH) funded 123 grants totaling $28,099,418 for tobacco research, with 40% ($10,276,391) slated for animal testing. According to a 1957 medical journal:

"the failure of many investigators to induce experimental cancers, except in a handful of cases, during fifty years of trying, casts serious doubt on the validity of the cigarette-lung cancer theory."

At the time, 27 human studies had already established a clear link between smoking and cancer. Today, in spite of reams of data establishing the tobacco/cancer link, the industry still conducts tobacco testing on animals, spending millions of dollars and killing hundreds of thousands of animals in an attempt to manipulate data. Tobacco testing on animals has been illegal in Britain since 1997.[4]

The Faces of Devocalization - Coalition to Protect and Rescue Pets. - September 2009 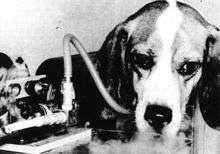 At one point, Dr. Oscar Auerbach "trained" 86 beagles to smoke in experiments where 12 developed cancer. It was said to be the first instance of tumors produced in large animals exposed to tobacco smoke. However, it is not clear why this particular study was given validity over previous studies in large (and small) animals, which failed to produce cancer. The American Cancer Society, which financed much of the research, announced that the results "effectively refute contentions by cigarette-manufacturing interests that there was no cigarette-cancer link." The response of the Tobacco Institute, an industry trade group, was that it was "impossible" to draw conclusions from work on dogs subject to such "stressful" laboratory conditions." [5]

Dr. Auerbach, a pathologist and Senior Medical Investigator at the Veterans Administration (VA) Hospital in East Orange, New Jersey, conducted experiments on beagle dogs from 1967 to 1970. The first experiment utilized twenty beagles, who were reportedly subjected to "debarking" (surgical removal of tissue from the vocal chords) to keep them quiet in the laboratory. The dogs were also given tracheotomies (surgical openings in their windpipes) into which tubes were inserted. Lab aides periodically placed a lit cigarette, without a filter, at the other end of the tube. The beagles were made to puff between six and 12 cigarettes per day, an amount experimenters judged to be the equivalent to smoking 1-2 packs/day in humans. A laboratory aide would attend each dog while they were smoking. Some of the dogs became addicted to nicotine. One displayed withdrawal symptoms when cigarette smoking was discontinued. Some of the dogs reportedly became so addicted to the administration that they wagged their tails and jumped into the smoking box (according to a report in a medical journal by the experimenters).

The experiments were financially supported by the VA and the ACS. The "smoking beagle" experiments continued for four years and were widely protested as animal cruelty. The National Catholic Society for Animal Welfare placed advertisements in newspapers throughout the U.S. protesting the experiments. The ads showed one of the beagles exhaling cigarette smoke while hooked up to a smoking machine. The caption said, "They cannot protest. They cannot escape. They are defenseless against the demands of science." The ads encouraged readers to contact their congressmen to ask them to stop the experiments and thousands responded. Dr. Auerbach defended the experiments, claiming that it would take 20 years worth of human studies to determine if filtered cigarettes were safe, as opposed to 18 months worth of dog experiments. Although he had already (along with many others) established a clear tobacco/smoking link through pathology and clinical studies (see also Oscar Auerbach), apparently, the focus of this particular study was to determine whether filtered cigarettes were "safe". It is not clear how such a notable difference in physiology (18 months as opposed to 20 years) would be an advantage, let alone valid and applicable to humans. Nor is it clear how severely mutilated beagles, subjected to not one, but two surgical procedures (often severely debilitating in themselves) smoking cigarettes through tubes inserted into tracheotomies, demonstrated this purportedly successful outcome. Never-the-less, according to the ACS, the results refuted contentions from tobacco interests that there were no cigarette-cancer links and claims to the contrary were only "statistical."[6]

Nineteen of the beagles died during the course of the first set of experiments involving 20 beagles. The remaining beagle was to be killed when the studies were concluded. [7], [8]

Covance Laboratories (under its former name of Hazleton Laboratories) was associated with the Council for Tobacco Research conducting animal studies for tobacco companies. In September of 1972, Carl Baker, the former chairman of the National Cancer Institute (NCI), became president of Hazleton Laboratories. Hazleton was a "major research contractor" for NCI and had been conducting chemosol treated cigarettes for "tar" tumorigenicity for nine U.S. cigarette manufacturers since 1970. [9]

In an NCI sponsored study, Hazleton provided animal data favorable to the tobacco industry that contributed to the continued marketing of cigarettes. Between February of 1978 and March of 1980, Hazleton conducted a two-year study of for NCI on the the cardiovascular effects of mainstream cigarette smoke and carbon monoxide on "204 permanently tracheostomized male beagle" dogs. The dogs were forced to inhale all of the mainstream smoke generated by six cigarettes a day while being fed diets of varying levels of cholesterol. A number of dogs died during the study. The study concluded that smoking may have "a possible protective effect" and "lent no support to the suggestion that cigarette smoking increases the rate of development of atherosclerosis." [10]

Animal testing has many advantages for the researcher, the tobacco and other industries. He or she has has virtually complete control over powerless, expendable and often silent (debarked), subjects. Published results are conveniently and profitably churned out in a few months or years. Results of animal experiments are open to interpretation and are therefore, easily manipulated. Researchers are free to use and kill subjects (over 90% of which do not even have to be reported) [11] until desired results are achieved or even to refute human studies and perpetuate confusion.

Media accounts often depict vivisection issues as "animal rights vs. science". Endless pseudo debates and straw man arguments provide convenient smokescreens for flagrant welfare violations and hostility to reforms. In other industries as well, they provide a smokescreen for incompetence, inefficacy and damage to human health. For example, the practice of product testing by pharmaceutical and chemical companies has been regularly criticized by the medical and scientific community as unscientific and dangerous to humans. However, reporters receive "news handouts" from laboratories and report them without question. [12], [13] See also animal testing, sections 1 through 3.

Animal researchers sometimes publish in hundreds of journals, much to their professional and financial success. There is also a huge and profitable industry built which includes animal breeders, suppliers of cages and equipment designed specifically for animal testing. [14] A 2001 audit for 30 facilities revealed that approximately 56% received over 100 million per year from the NIH for animal research. [15] See also NIH.

"The link between smoking and lung cancer in humans was denied for many years based on vivisection data. Health warnings were delayed for all those years." Moneim A. Fadali, M.D. [16]

"Animal experiments failed notoriously to demonstrate a smoking-cancer connection for over half a century...If the greatest killer of our time was promoted by physicians based on animal experiments, there is obviously something terminally wrong with the system." C. Ray Greek, MD [17]

"...all the useful evidence we have accumulated about cancer has come from human studies. The links between chemicals, x-rays, foods, and asbestos on the one hand and different types of cancer on the other hand were all obtained after doctors had studied human patients. Instead of helping, animal experiments have consistently slowed down the speed with which these essential discoveries have been accepted.

For example, the link between tobacco smoke and cancer was spotted decades ago by doctors working with human patients, but animal experiments were used as an excuse by politicians who wanted to avoid taking action against (and therefore annoying) the wealthy tobacco companies. Researchers spent decades making beagles smoke cigarettes and painting tobacco tar of the backs of mice in attempts to establish a laboratory link between tobacco and cancer - a link which was not needed since links clearly existed between tobacco and human cancer. The decades of vague and inconclusive results gave the tobacco companies a chance to keep the confusion going and to prevent doctors giving their patients authoritative warnings about smoking tobacco. Doctors knew that cigarettes caused cancer but were encouraged to keep quiet while animal researchers spent years failing (quite predictably) to obtain any conclusive results." Dr. Vernon Coleman [18]

On December 6, 1993, the New York Times quoted sworn testimony of William Campbell, then President and CEO of Phillip Morris:

"A. To my knowledge, it has not been proven that cigarette smoking causes cancer.
Q. What do you base that on?
A. I base that on the fact that traditionally, there is, you know, in scientific terms, there are hurdles related to causation, and at this time there is no evidence that -- they have not been able to reproduce cancer in animals from cigarette smoking." [19], [20]