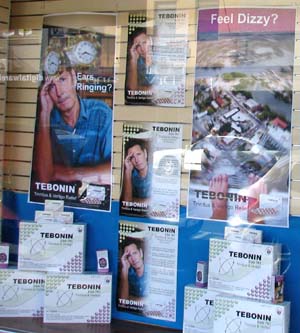 Tebonin is a brand name pill manufactured by the German company, Dr. Willmar Schwabe GmbH & Co KG. Tebonin is based on an extract from the ginkgo biloba tree with the company claiming that a pill a day will relieve tinnitus (the ringing sound some people have in their ears), dizziness and even improve mental alertness. The promoters claim the drug improves "impaired micro-circulation", reduces "free radicals" and "promotes optimum cell function."[1] According to the company 8 million pills are consumed every day.

Tebonin is ranked as one of the top over-the-counter drugs in Germany and is widely available in the U.S., Japan and Europe.

Schwabe, like so many companies in the herbal supplements sector, trades on its feel-good image. "From Nature, For Health," its website claims. That's the story the company wants you to hear. In April 2006, Schwabe Pharma (Australia) Pty Ltd and its distributor, Natural Health Products Pty Ltd, launched Tebonin onto the Australian market. When major advertisements began appearing in the pages of Australian Women’s Weekly, New Idea and newspapers, AusPharm Consumer Health Watch wondered whether the scientific literature supported the claimed health benefits made in the gushing advertisements.

With their suspicions aroused, they drafted a report disputing that the pills are as effective as claimed. But controversy over the effectiveness of ginkgo biloba herbal products is nothing new. A 2005 review of clinical studies into ginkgo biloba, published in the Journal of Ethnopharmacology, concluded that "extracts are of little more use in the treatment of tinnitus than a placebo."[2] (A placebo is an inactive pill used as a control in a trial to distinguish between the effects of the real drug and the reported effects of those who think they are getting the real thing.)

The three authors of the journal article, who were from the Department of Pharmacology and Toxicology at the University of Otago in New Zealand, concluded, "Treatments for tinnitus that do not have therapeutic efficacy not only waste money but can potentially prevent patients from seeking therapy that is efficacious. Furthermore, the unsupervised use of Ginkgo biloba extracts with other medications could lead to adverse side effects which are unnecessary and not justified in terms of therapeutic benefit." (Schwabe argues that their patented extract is different from other ginkgo biloba products. The company therefore claims the medical research disputing the efficacy of ginkgo biloba doesn't apply to its pills. However, this interpretation is disputed.)

Soon after sending a copy of their draft report to the company, they were hit with a writ seeking an injunction. While medical researchers debate the value of the extracts, the Australian companies promoting Tebonin wanted to prevent the publication of the AusPharm report. In early July, Federal Court of Australia Justice Andrew Greenwood granted a temporary injunction. [1] While Greenwood envisaged the injunction would only be in force until a full trial, the prospect of the massive costs of a trial forced the consumer groups to retreat. As a result of negotiations with the company, they agreed to make the injunction permanent.

Subsequently, the editor of Australian Prescriber, John Dowden, wrote s that in two other instances where drug companies sued drug bulletins, the judgements favoured the publishers. In the Tebonin case, Justice Andrew Greenwood decided that as a copy of the draft report had been sent to the government regulator, granting of an injunction would not harm the public interest. "Unfortunately, the Department of Health and Ageing has said that any investigation by the TGA [Therapeutic Goods Administration] will be commercial-in-confidence and the results will not be disclosed to the public," Dowden wrote. It is time, he suggests, that the health supplement industry opened itself up to greater scrutiny of its products.

As AusPharm had submitted a copy of its draft report to the Therapeutic Goods Administration, the government regulator, it proceed to investigate the issues raised, but only after the matter was no longer before the courts. Ultimately, the TGA agreed that some of the matters raised in the suppressed report did constitute breaches of the Therapeutic Goods Advertising Code. The Complaints panel found that "on balance, the evidence before it would support a representation that the product could be effective in relieving the symptoms of tinnitus. However, the Panel also considered that the countervailing evidence was such that the strong emphasis on clinical and scientific proof and the breadth of scientific evidence available could not be supported." [2]

A range of claims made in support of Tebonin, the panel noted, "would amount, for a reasonable consumer, to a representation that the scientific evidence for the product is extensive, unequivocal, of exceptional scientific quality, and not subject to any serious question."

"The Panel considered that such a representation was not justified by the evidence before it," it concluded. As a result it found both the web and print advertisements were in breach of three sections of the code and upheld the complaint. [3]