Mia Veltri is a student at University of Wisconsin, and an intern at CMD.

As a 501(c)(4) organization, the Wellspring Committee is not required to disclose its donors. The group's tax exempt status allows them to be "part of a network of conservative tax-exempt groups that do little but transfer money, via grants, to other groups closer to the political front lines."[1] According to National Public Radio and the Center for Responsive politics, the Wellspring Committee thus far "has raised $24 million, and distributed nearly $16.9 million to other social welfare groups." Of the $24 million the group has received, only $251,000 has been traced back to identifiable donors.[2]

Distribution of Grants and Other Financial Assistance

According to the Center for Responsive Politics, the following organizations received assistance from the Wellspring Committee between the years 2008 and 2011:

On October 21, 2013, the Milwaukee Journal Sentinel reported another John Doe proceeding is under way. The investigation is a further examination on “a number of leads turned up by an earlier John Doe probe.”[3] According to the Milwaukee Journal Sentinel, the focus of the John Doe inquiry is a “current legislative leader and the governor’s contest.”[3] The investigation will look into a number of state issues, which span five Wisconsin counties and include the recall elections. [3]

Motion for Access to the Public Records Owned by Milwaukee County

“..the return of the Records and associated computer devices, originated and owned by Milwaukee County, to the County’s possession where the newspaper and the public may have access to them in accordance with the Open Records Law.”[4]

In the motion, the newspaper argues for the release of these documents and emails based on:

(1) Keeping knowledge from defendant's who might otherwise attempt to escape.
(2) Prevent the defendant from collecting perjured testimony to use at trial.
(3) Prevent persons from tampering with the prosecution's evidence or testimony.
(4) Creating an environment where witnesses feel more at ease disclosing information.
(5) Prevent testimony that isn't true from becoming public.

The Milwaukee Journal argues that none of these justifications apply to the records in contest.

The motion also reveals that the newspaper attempted to retrieve these documents through a few different channels. These attempts included: An open records request to Milwaukee County during the course of the John Doe proceeding (Milwaukee County could not comply because they did not keep copies of the records); an open records request to Judge Neal Nettesheim from David Umhoefer, sent on July 3, 2013; and a letter from the editor of Milwaukee Journal Sentinel to the Milwaukee County Executive, requesting “he procure the return of the Records and computers belonging to Milwaukee country but still under the deal of the John Doe proceeding…”[4]

In a separate but related proceeding, the Milwaukee Journal Sentinel- along with several other media organizations-- moved to intervene in the criminal appeal of Kelly Rindfleisch. Ms. Rindfleisch (Scott Walker's former deputy chief of staff while he was Milwaukee County executive) pled guilty to official misconduct "for doing campaign work at her government job" in 2012.[5] As she appeals her conviction, Ms. Rindfleisch has requested that her emails and other records continue to be sealed. [5] These records, the news organizations claim, are the property of Milwaukee County for the same reasons articulated in the September 18 motion. Milwaukee Journal Sentinel attorney Robery Dreps argued: "This is a criminal case in which a defendant, convicted and sentenced in a public proceeding involving the use of public resources with evidence from public records, has exercised her right to appeal," "there is nothing private about it."[6]

On October 9, 2013, the news organizations’ motion for intervention was granted, allowing intervention “for the sole purpose" of opposing Ms. Rindfleisch's motion to seal the documents in her appeal.[7].

Repudiation of the United Sportsmen of Wisconsin Grant

On August 29, 2013, The United Sportsmen of Wisconsin Foundation (“United Sportsmen”) was named the recipient of a $500,000 grant by the Wisconsin Department of Natural Resources. The grant was slipped into the state budget by Assembly Majority Leader at the time Scott Suder. According to the Milwaukee Journal Sentinel:

"In May and June, Suder had worked with other GOP lawmakers to insert a provision into the state budget creating a grant so narrowly tailored that the United Sportsmen Foundation was all but assured of receiving it."[8]

United Sportsmen's receipt of the grant quickly aroused scrutiny. Despite its alleged purpose to promote hunting, fishing and trapping in Wisconsin, the grant had been poorly advertised and included terms that excluded most sporting groups in the state.[9] Moreover, United Sportsmen had no record of outdoors training - but according to the Milwaukee Journal Sentinel, did demonstrate "close ties to GOP politicians."[10] The Journal Sentinel pointed to Suder's emails and a planned fishing trip with the head of United Sportsmen in August 2013 as evidence of Suder's relationship to the group. The emails also reveal Suder and United Sportmen had ties to the conservative advocacy group Americans for Prosperity. [8]

According to Rep. Cory Mason (D-Racine), the grant was proposed to the budget committee as a competitive opportunity for groups across the state. However, Mason said he later realized, "in hindsight, [the grant] seems like a sweetheart deal for one group that has ties to Scott Suder."[9] Members of the budget committee also were not informed that the grant would result in the loss of $28 million dollars in annual federal aid to the state.[11]

Governor Walker's administration was notified about the implications of the grant after the U.S. Fish and Wildlife Service sent two warning letters to the state DNR. The letters advised:

The DNR also notified Scott Suder and Assistant Majority Leader Jim Steineke (R-Kaukauna) about the federal funding issues, and the potential loss of $28 million federal dollars. Suder –nearing the end of his term in legislature, and scheduled to begin working for Walker in the Public Service Commission in fall 2013 –ignored the warnings.[11]

The grant was approved by vote in May, and raised serious objections from the state DNR. Consequently, Governor Walker vetoed the measure in part, ensuring that only state money would be used for the grant. This act, “avoided any loss in federal aid, but it also meant that state taxpayers were going to have to pay for the entire grant.”[11]

The deal was finally cancelled by Gov. Walker on September 5, 2013, after it was revealed that United Sportsmen's President Andy Pantzlaff "misrepresented [United Sportmens'] federal tax-exempt status to state officials throughout the grant process." [10]

The response to Suder's actions were significant. Sportsmen were "outraged" and "the liberal group One Wisconsin Now filed an ethics complaint with the state Government Accountability Board over the matter."[12] As a result of the public outcry, Suder declined the position with the Public Service Commission. In his brief resignation, he stated: "I want to thank you for offering me an opportunity to work with the Public Service Commission, however I must respectfully decline as I have decided to accept a position in the private sector at the Wisconsin Paper Council. Thank you for your consideration."[12]

Many believe that Suder’s resignation was prescribed by Gov. Walker in order to, “bur[y] the controversy over the grant.” As Senate Minority Leader Chris Larson, D-Milwaukee stated:

“While Gov. Walker may hope today’s personnel change will allow the GOP sportsmen scandal to dissipate, Wisconsinites will not be so quick to forget Gov. Walker’s continued misuse and politicization of Wisconsin’s taxpayer dollars,” “Rep. Suder was not alone in his moves to funnel taxpayer dollars to a political group with little sporting experience.”[13] 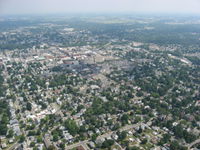 ]]Mia was born in Findlay, OH. She lived there for 18 years.

"this is a block quote aslkdfDKJFDSLKJF"

Mia studied history at DePaul University, and law at the University of Wisconsin.[3]

Drinking raw milk is against the law in Wisconsin.

We are adding a reference.[3]