BAE Systems is the largest arms manufacturer in Europe and the fourth biggest in the world. Registered in the UK, the company has annual military sales of $15bn. Products include fighter and trainer aircraft, warships, submarines, torpedoes, missiles, radar and tactical communications systems, artillery and ammunition. The company employs 90,000 people, 41,000 of whom are in the UK. The company was formed on November 30, 1999 with the merger of British Aerospace and Marconi Electronic Systems, which was made up of several divisions of GEC-Marconi in the UK and overseas.

The company has drawn heavy criticism, both for the use of its products to facilitate human rights abuses and corruption. Its Hawk jets alone have been sold to Brunei, India, Indonesia, Kenya, Kuwait, Malaysia, Oman, Saudi Arabia, South Africa, South Korea, United Arab Emirates and Zimbabwe. The company is currently under investigation by the Serious Fraud Office over allegations that the company kept a "slush fund" worth some Â£60m to bribe officials from Saudi Arabia. The company sells more to Saudi than to the UK Ministry of Defence.

A BAE Systems executive sits on the board of the Professional Services Council (PSC), a trade association. PSC is a major opponent of the Fair Pay and Safe Workplaces Executive Order, an order issued by President Obama in 2014 that aims to ensure that federal contractors comply with federal wage laws, health and safety standards, and civil rights laws.[1]

An investigation by the Center for Media and Democracy of OSHA inspection records found that numerous corporations (and/or their subsidiaries)--including BAE--whose executives sit on the board of PSC had been cited for serious and repeat violations of OSHA standards from 2013-2015 that would be reportable under the EO. A "serious" violation indicates "a substantial probability that death or serious physical harm could result" from a hazard, a "willful" violation is cited when "evidence shows either an intentional violation of the Act or plain indifference to its requirements," and a "repeat" violation indicates the business "has been cited previously for a substantially similar condition."[2]

In 2014 BAE generated £3.66 billion ($5.78 billion) in revenue from the U.S. Department of Defense, one of its three largest clients.[3] DeEtte Gray, President of BAE's Intelligence and Security Sector, sits on PSC's Board of Directors.[4]

BAE Systems subsidiaries operate numerous shipyards, at least two of which have separately been cited for numerous OSHA violations over the last three years alone.

04/16/2013[6] Following an investigation in response to a complaint, OSHA cited BAE Systems, Inc at a manufacturing site in York, Pennsylvania for 2 "Serious" violations and penalties of $8,500 for violating provisions of OSHA's comprehensive standard to protect workers from exposure to cadmium, a known cancer-causing substance.[7] The violations including requirements for collecting and handling biological samples and for training workers. In an informal settlement, these were reduced to 1 "Serious" and 1 "Other-than-Serious" violation, though the penalties were sustained.

01/20/2015[8] OSHA cited BAE Systems, Inc. at the company's Norfolk Shipyard for 1 "Other-than- Serious" violation and an initial penalty of $5,000 for violating the standard for reporting to the government fatalities, hospitalizations, amputations, and losses of an eye as a result of work-related incidents. In an informal settlement the penalty reduced to $3,750. [See below for additional violations by a BAE subsidiary at the Norfolk shipyard.]

02/26/2015:[9] In a planned inspection at the Army Strategic Logistic Activity Center in Charleston, SC, BAE Systems, Inc. was initially cited for 1 "Serious" violation which was reduced in a formal settlement to 1 "Other-than-Serious" violation for failing to ensure that employees were adequately trained to render first aid. The initial fine of $2,295 was sustained. The case remains open.[10]

02/06/2014[11] Following a planned inspection at a BAE Systems, Inc. site in Cordova, AL, the company was fined $2,250 and cited for 1 "Serious" violation of the OSHA standard for the storage and protection of oxygen-fuel cylinders used in gas welding and cutting. In an informal settlement the violation was reduced to 1 "Other-than-Serious" and the penalty to $1,350.

This 432-acre site provides direct access to and from the Gulf of Mexico and major shipping lanes and offers dry-dock and heavy-lift capacity for the largest ships trading in and around the Caribbean and Gulf of Mexico region, including those from commercial fleets, cruise ships and vessels that serve the U.S. defense cargo market.[12]

On April 3, 2013, 64-year-old John R. Johnson and another BAE Systems Southeast Shipyard Alabama, LLC employee at its Mobile, Alabama shipyard were thrown into the Mobile River after the pier they were standing on was hit by the Carnival Triumph cruise ship after it broke loose from its moorings.[13] One worker survived, but Johnson's body was found days later after a massive search.[14][15]

The National Transportation Safety Board investigated the incident, and in a Marine Accident Brief issued on January 23, 2014, concluded "...that the probable cause of the breakaway of the Carnival Triumph from its moorings and the subsequent collision with the dredge Wheeler and the towing vessel Noon Wednesday was the successive failure of multiple mooring bollards, which were known by BAE Systems to be in poor condition with an undetermined mooring load capability."[16]

Following a separate inspection, OSHA issued 1 serious violation and a $7,000 fine to BAE Systems Southeast Shipyard Alabama, LLC.[17] The company contested the citation, but the case closed in April, 2015 following a decision by an administrative law judge. According to OSHA, the company allowed vessel mooring bollards and hardware to break free from a pier under load. "The employer failed to conduct additional analysis of the Pier-K east and west bollards to determine if the mooring hardware were adequate to handle moored vessel loads and to conduct repairs of the mooring hardware prior to mooring vessels at Pier K of the facility exposing employees to struck- by, caught-in/by and drowning hazards."

06/27/2014[18] After a planned inspection, BAE Systems Southeast Shipyard in Mobile Alabama was cited for 2 "Serious" and 1 "Other-than-Serious" violation, with a penalty of $6,100 for violating OSHA's general duty requirement, and for failing to provide protection from hazardous machines and dangerous floors.

"Located in a U.S. Navy mega-port and principal commercial area, the [shipyard's] primary customer is the U.S. Navy."[21]

06/12/2015[22] After an unprogrammed inspection, OSHA cited BAE Systems Norfolk Ship Repair for 1 "Serious" violation for failing to prevent workers from using a walkway while it was being used as a working surface and issued a $5,000 penalty. The case closed on October 22, 2015.

01/14/2013[23] Following a programmed inspection, BAE Systems Norfolk Ship Repair was cited for 1 "Serious" violation of the standard for arc welding and cutting for failing to ensure that all cables were properly insulated to protect workers against electrical current. In an informal settlement the initial penalty of $3,000 was reduced to $2,250.

On September 3, 2015 the Associated Press[24] reported that plaintiffs in a gender-discrimination lawsuit filed against BAE Systems Norfolk Ship Repair Inc. have asked a federal judge to give preliminary approval to a $3 million settlement. "A class-action lawsuit was filed in 2013 by women working at BAE Systems Norfolk Ship Repair Inc. The women say in the lawsuit that they suffered pay and promotion discrimination, were retaliated against, and experienced sexual harassment. BAE denies any wrongdoing, but the settlement is unopposed by the company."

This case would not trigger a reporting obligation under the Executive Order, as it was settled before there was a judgment or merits determination. It is included to give an indication of the company's compliance with other important workplace laws and because it occurred at a sensitive federal site whose main customer is the U.S. Navy.

12/15/2014:[25] Following an inspection in response to a complaint, BAE Systems Southeast Shipyards Jacksonville was fined $4,250 and cited for one serious violation of the OSHA requirement that gangways be of adequate width and strength, maintained in safe repair, and safely secured.

07/29/2014:[26] BAE Systems Information and Electric Systems Integration was initially cited for 3 "Serious" violations and an initial fine of $21,000 (the maximum penalty for each initial violation) involving important electrical hazards. In the subsequent settlement, the company was fined $7,000 and cited for 1 "Serious" violation for failing to ensure that only qualified persons may perform testing work on electric circuits or equipment. 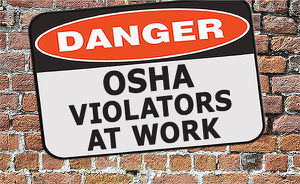 BAE lobbies the UK government at the highest level, securing favourable legislation, ministerial support for overseas sales and insurance on its deals to unstable regimes in the form of 'export credits'. BAE chairman Dick Evans is credited with opening up the Labour government to the company's influence.

The Observer newspaper has quoted an 'industry insider' as saying that Dick Evans, the then chairman of BAE, had unrivalled access to the British Prime Minister: "Dick is entirely ruthless. He is a hard man and gets his own way. But he has also been the most successful in shifting the political ground and courting New Labour. He's one of the few businessmen who can see [Tony] Blair on request." [1]

The former British Foreign Secretary Robin Cook wrote of the relationship between BAE, then known as British Aerospace, and the government in his book The Point of Departure: "In my time I came to learn that the Chairman of British Aerospace appeared to have the key to the garden door to Number 10. Certainly I never once knew Number 10 to come up with any decision that would be incommoding to British Aerospace".

BAE Systems also lobbies the U.S. government. The company spent $5,140,000 for lobbying in the U.S. in 2006. Some of the lobbying firms used were Van Scoyoc Associates, Inc., Covington & Burling, and American Defense International. [27]

BAE Systems gave the following to federal candidates in the 2006 U.S. election through its political action committees: [28] [29]

Ownership of other companies