From SourceWatch
(Redirected from Sheldon G. Adelson)
Jump to navigation Jump to search 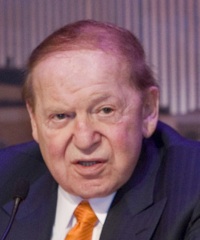 Adelson spent about $20 million supporting the failed presidential campaign of Newt Gingrich, including at least $10 million to his PAC "Winning our Future". Adelson's contributions helped Gingrich win the crucial South Carolina Republican Primary. [4] Adelson has given $20 million to Restore Our Future, the SuperPAC supporting the presidential campaign of Mitt Romney. The Romney campaign's dependence on Adelson's contributions drew criticism from fellow Republicans, including John McCain, who told the PBS Newshour: "Much of Mr. Adelson's casino profits that go to him come from his casino in Macau, which says that obviously, maybe in a roundabout way foreign money is coming into an American political campaign," [5] Adelson's contributions to "outside groups" include $10 million to Karl Rove's Crossroads GPS, $10 million to assorted Koch-funded groups like Americans for Prosperity, and $5 million to Eric Cantor's "Young Guns Network". [6]

2012 Investigation by US Justice Department

Since early 2012, Adelson has been the subject of a Justice Department investigation inquiring into activities at Adelson-controlled casinos in Macau, a special administrative region of China, west of Hong Kong. Adelson is suspected of violating sections of the Foreign Corrupt Practices Act (which prohibits the bribing of foreign officials) while dealing with the Chinese government. [8]

Emails leaked by ex-company employees prompted the investigation, Adelson allegedly instructed a top executive to make a $700,000 payment to Leonel Alves, a Macau legislator, to help resolve two issues: a lawsuit by a Taiwanese businessman and permission to sell luxury apartments in Macau. [9] Adelson instructed executives at the Macau casino to pay the official despite warnings from his general counsel that the payment could violate of the Foreign Corrupt Practices Act. [10] The Chinese government has fined Adelson's company $1.6 million for regulations violations [11]

According to the Newsmeat Hall of Fame of political contributors, between 1984 and June 2007, Adelson has contributed nearly a million dollars, $791,563 to Republican candidates, $165,069 to Democratic candidates, and $37,000 to special interests.[14]

In 2006, shortly after the November elections, Adelson gave $1 million to Republican Newt Gingrich's 527 committee, American Solutions for Winning the Future, a group which Gingrich formed earlier that year. [15]

Adelson was one of several prominent conservatives and board members of the Republican Jewish Coalition funding Freedom's Watch, a pro-Bush White House front group[16] which on August 22, 2007, began "a multimillion-dollar advertising campaign to urge members of Congress who may be wavering in their support for the war in Iraq not to 'cut and run'."[17]

Adelson spent at least $30 million on political activities in the 2008 election cycle.[19]

A Boston native, Adelson is the CEO of Las Vegas Sands.[20] On August 17, 2007, the Associated Press reported that William P. Weidner, President/COO/Director of the Las Vegas Sands Corporation, a Las Vegas, Nevada, resort and casino and another Freedom's Watch supporter, said that Adelson, who "keeps a home in Massachusetts and pays taxes in the state," had been lobbying local officials "to legalize casino gambling" in Massachusetts.[20]

"He's the third richest person in the U.S., worth $20.5 billion, with a rags-to-riches story: the son of a Boston cabdriver, Adelson inaugurated the Comdex computer trade show, and then went into tourism, real estate, and casinos. He is CEO of the Las Vegas Sands Corp., which operates the Venetian Casino Resort and the Sands Expo and Convention Center. Adelson is a major contributor to Jewish and Israeli causes,[21] and to the GOP.[22] This series of ads isn't his only propagandistic foray: the Vegas casino king has also gone into the newspaper business – in Israel.[23] Yisrael Hayom is a new daily paper closely tied to the ultra-nationalist wing of the Likud party, and Benjamin Netanyahu's political aspirations.[24] It was recently launched with a massive free mailing to hundreds of thousands, and has attracted considerable attention," Justin Raimondo wrote August 24, 2007, at Antiwar.com.[25]